Farewells During a Pandemic – Ep 247 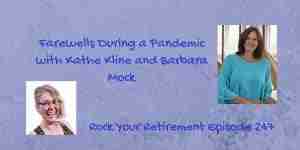 Retirement is a time that marks the passage from a life full of work to a life of leisure, accomplishment, and choice. As most people feel defined by their job, that transition to retirement is not always easy. Like other major life transitions, it can be filled with various emotions and concerns and it has been a crazy two weeks of farewell for Barbara. Not everyone would actually go through what she did, but some people would. And it's good to be prepared for the emotional roller coaster. Besides, retirement marked as a life passage into the next chapter of your life.

One Farewell After Another

It starts with your retirement letter which was really hard to write. Barbara wanted to be really thoughtful, but she also wanted to say goodbye to her county executive who had faith in her to be a leader. Then you have to send a letter to HR and give them all the details of what you want with your leave time. That one letter unleashed a whole bunch of things.

The first one was on that following week, the county council entered into a joint resolution with our county executive. Barbara was really humbled to be on my vacation called by the Council, you need to be at this meeting on Monday. it was so humbling to have the county executive and accounting Council, not only say nice things but actually adopt a resolution that will be in the county record forever.

No matter how much you’ve looked forward to the day of leaving your place of employment when the day comes, it might be a surreal experience. Make your transition easier for yourself and others by letting people that have touch your heart. Anyone Barbara could think of that God brought to mind that she needed to say a special word of goodbye. Sometimes she connected with them and they'd either burst into tears or were delighted, or exchanged phone numbers.

A couple of people Barbara could tell were online. But they didn't pick up and she thought, Oh, well, maybe they're on a break. So then she'd leave on a really nice voicemail saying goodbye, saying if you want to stay in touch, and a few of them emailed her back and said, I'm sorry, I just couldn't take the call. I didn't want to cry. But on those hard days, when things are going bad, I'm going to play your voicemail.

I'm retired, I've been learning a lot, Barbara said. Next week, we fly to Arizona for kind of a romantic anniversary trip, combined

with golf and sightseeing. It feels very strange. I Barbara have to mentally tell herself, you will never work again. You don't have a schedule. You don't have to worry about anything today. She thought it'd be harder to detach than it is. But when you don't have email or an office or things calling too, you really don't know what's going on, you dismiss the people that you were with. It's weird. It's just plain weird to not have that, especially when you've been doing something like this for so long, to just all of a sudden be on a permanent vacation.

What was lost can be restored. And that is all your hopes, all your dreams. It's temporary. And if I'm an indicator of anything that's going forward, whatever it was, you felt like you missed out during the pandemic will be restored, but you'll be so much more grateful for it. The other thing I was learning, just hearing people is telling people how you feel about them in life before the memorial service. And that when God brings someone across your path, by showing them love or encouragement or empathy, you just don't know the impact it's going to have on them for that moment or that day. Exchange contact info with people that you want to stay in touch with. It's too overwhelming to do it all at the end. So give yourself some time for those people that you want to stay in touch with.

Do you have any just general questions? Email us your questions at Podcast@RockYourRetirement.com and we will try to answer them in the show.