We all heard that Laughing is the best medicine. Vikki is with us today to teach us how we can laugh away our problems. You can listen to the show at http://rockyourretirement.libsyn.com/laughing-with-parkinsons-episode-26 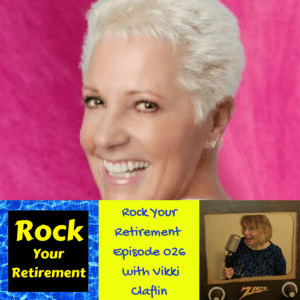 She wrote the book, “Shake, Rattle, and Roll with It – Living and Laughing with Parkinson's“.  Since my father has Parkinson's Disease, I had to get her on the show!  She did not disappoint!  We talked about her book, her life, and our ailments, including my dystonia.

Shake, Rattle, and Roll with It- Living and Laughing with Parkinson's:

A few weeks after her first book, “Shake, Rattle, & Roll With It, Living & Laughing with Parkinson’s”’ came out, she received an email from a woman who said, “My mother was diagnosed with Parkinson’s ten years ago. Since then, no one in the house has ever been allowed to talk about it, or even mention the word ‘Parkinson’s.” This created a lot of stress for the family as we all tried to pretend she wasn’t shaking or stumbling. Any reference to her condition was immediately shut down. I bought her your book and set it on her nightstand. She read the whole thing in one sitting that night. The next morning, she came down for breakfast and began talking about her Parkinson’s like it was the weather. She now talks about it and even laughs about it easily. The elephant in the room is gone. Thank you, thank you. Thank you.”

We wanted to bring Vikki's award-winning humor to our audience, considering that many of us have parents and loved once with Parkinson's Disease (including myself).  I wanted to find out how she is laughing with Parkinson's, and she sure let us know! After all, her name has “laugh” in it!

Vikki gives us a glimpse into what it's like to have the disease, and how anyone can kick their troubles in the butt by continuing to laugh, regardless of your circumstances.

Vikki lives in Hood River, OR, where she writes the award-winning humor blog Laugh Lines: Humorous thoughts and advice on how to live young when you're… well… not, where she doles out irreverent advice on marriage, offers humorous how-to lists galore, and shares her most embarrassing midlife moments. She talks about mastering midlife with a little common sense and a lot of laughter.

She has been featured on the Michael J. Fox Foundation website, Erma Bombeck's Writer's Workshop, The Huffington Post, Scary Mommy, Generation Fabulous, Midlife Boulevard, Better After 50, and Funny Times Magazine. She also received a BlogHer14 “Voices of the Year” Humor award. Vikki's first book, Shake, Rattle & Roll With It: Living & Laughing with Parkinson's chronicles her hilarious, and sometimes poignant journey, about living with Parkinson's disease. Her newly released book, Who Left the Cork Out of My Lunch? Middle Age, Modern Marriage & Other Complications is available now on Amazon.com. You can find more of Vikki’s writing at http://laugh-lines.net

Shake, Rattle & Roll With It: Living & Laughing with Parkinson's Chronicles

Who Left the Cork Out of My Lunch?: Middle Age Modern Marriage & Other Complications

Something people should know before they retire:  Kathy Kinney, who played Mimi in The Drew Carey Show, says in her new book, “You don’t have to be 21 to have your whole life ahead of you.” Vikki loves this!

How to get “unstuck” in your retirement: Learn to laugh at yourself. You’ll never run out of material.