An Expert Interview About Senior Games…Ep 090 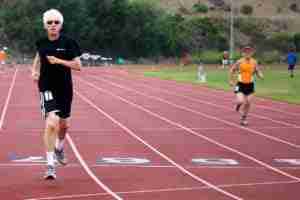 How did Alan Mindell get his nickname?  After dancing for years, Alan started running.  He wound up with some injuries, but got into shape.  At age 76, Motorbutt runs three times a week.  How often do you run?  (I don't run. Ever.)

He wanted to come on the show to talk about the Senior Games.

The Senior Games are San Diego's (and other counties) answer to the Senior Olympics. They are 50 years old in 2017 and there is a wide list of sports that are covered.

These sports include Track & Field; Pickleball; Archery; and Ping Pong to name a few.  If you do a Google search, you can find a list of contests and sports.  In San Diego, for the 2017 games, there will be 25 sports, including individual and team sports such as softball, volleyball, and soccer.

Alan's sport is the 400 meter. That's once around the track.  He said that the coolest thing he ever saw was a 100 year old man who competed in the Pole Vault.  Because he was the only participant, he was able to set a world record.  Listen to the episode to hear how he did it…it's pretty interesting!

And, if you are looking to make friends, it's a great place to do that too!

Attend the monthly luncheon.  Check your local Senior Games to see what they offer.

I asked Alan for his advice for someone who has never exercised before. He said to start slow. Spend a few weeks going “light”.  We at the Rock Your Retirement Show don't give medical advice, except for this:  Before starting any exercise routine, see your physician.

After you get the OK, go out there and have some fun in the senior games!