Retirement in a different country: Ep 130

Stephanie Cunningham came on the show to talk about her retirement in a different county.

Stephanie was born, raised and worked in Colorado until she took early retirement to join a round the world bicycle tour. While on the tour, she found Australia and decided to move there. Because of visa regulations at that time, she couldn’t work, which forced her into an early retirement. Trying all of the activities that are traditional in retirement left her unfulfilled and wanting more.

The bicycle tour was a millennial trip. While it wasn’t an inexpensive trip, it was for a whole year. Stephanie did a lot of physical training for the trip. It was recommended each rider do at least 6,000 miles before the beginning of the tour. Each weekday, Stephanie rode 135K. It was physically challenging but not nearly as difficult as she thought it would be. Stephanie enjoyed the trip because you see things you wouldn’t see on a bus or in a car.

One new activity she tried was yoga and enjoyed it. She decided to become a yoga teacher for over 50’s and then added yoga training to teach over 50’s for yoga teachers. In March of last year, she started the podcast Changing the Face of Yoga to expand the perception of yoga. She will launch the second broadcast in July about finding purpose in retirement as she struggled to find purpose and feels it is very important for a successful retirement.

She talks about her initial culture shock and the challenges for retirement in a different country. 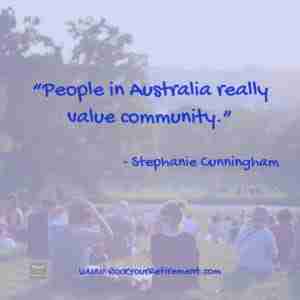 Australia is a tenth of the US population but as large land wise as the US. It is less crowded and frantic. Stephanie claims it is almost 10 years behind in certain ways. Australia has less commercial ads and consists of a much more laid-back atmosphere. It is also gorgeous.

Impact of Not Being Able to Work

Stephanie was not planning on retirement when she moved to Australia. She had worked for Colorado and retired for a nominal amount of money. She planned on taking a year off then going back to work in a different way. There were a lot things Stephanie loved about working and it was a hard adjustment at first. She certainly never imagined her retirement in a different country.

Advice for Retirement in a different country

Stephanie recommends really planning it and understanding what you are getting into. She recommends going to an expat community when first adjusting. In addition, look at exchange rates and cost of living when considering retirement in a different country.

Stephanie is launching a new podcast in July of 2018 called Changing the Face of Retirement. If you would like to check it out go to https://www.yogalightness.com.au/changing-the-face-of-retirement/

Would you or have you considered retirement in a different country? Let us know in the comments below