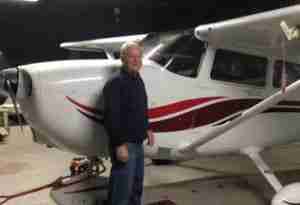 Peter Glover was learning to fly when he was 60 years old!

Some people retire once, Peter Glover did it twice. The first was a planned retirement and an injury caused the second. This wasn't necessarily a bad thing though!

With time on his hands, Peter was able to pursue his passion of learning to fly.

Before Peter retired, he raced cars and motorcycles. His mechanical experience allowed him to build “rally cars”. Peter won a some major races in Australia. Once he retired from this work, he bought a large sheep and crop farm. With basically no experience, Peter managed his farm successfully until he was injured and hurt his back. This stopped his farming career.

Peter didn't have the opportunity to become a pilot as a teenager.  But it was still in his heart to learn.  And after he spoke with a pilot at a car race one day, he decided he was going to fulfill his dream of learning to fly.

Think it's expensive?  Learning to fly might not be as expensive as you think.  But not everyone can do it because you would spend about as much for a good light plane as a mid priced luxury car.

Henry and Peter discuss all of the details in learning to fly such as:

There is a lot of information on the internet about flying.  And you can subscribe to magazines on the subject as well.  Check out your local airports as they often have flying schools.  Here in California some of the Community Colleges offer it as well.

If you have any experience in flying leave a comment in the box below.