Woodworking in Retirement: RE007 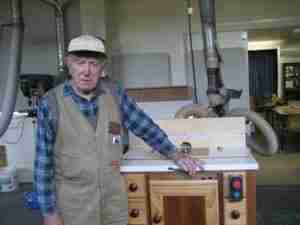 George Young is Woodworking in Retirement

Henry interviewed George Young. George needed to fix up his own house, and so he developed a lifelong interest in woodworking. This interest didn't stop and now he's woodworking in retirement.

Henry talked to George about his life in Scotland and England.  George had a carefully planned emigration to Australia that fit in with his retirement plans.

After he moved to Australia, he quickly established his love of woodworking in retirement by joining a local woodworkers club.  He became enmeshed in its culture and community.

The Berwick Woodworkers Club is open to all men and women who agree to abide by the rules.  You don't need to have skills at first, but you must wish to learn skills.  Members help newcomers, and George is very proud that a young man they taught and supported went on to become ‘apprentice of the year' in Victoria.

George speaks deliberately and quite slowly, but always from the heart.

If you have an interest in woodworking in retirement, you will probably find a club reasonably close by searching the internet.  Henry put ‘woodworking club and his suburb' into Google and found a couple.  The more modern equivalent to these clubs seems to be the current spread of ‘Men's Sheds', but I do not know whether they allow women members.  Henry says it's a pity if they don't.

If you are interested in learning how to woodwork, check out:

17 awesome woodworking projects ANYONE can do.