RE020: Karaoke at Party Time 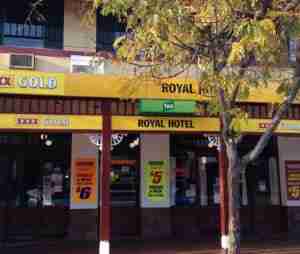 Henry had never gone to Karaoke before.

“I admit, I had a jaundiced idea of karaoke although I had never been to a session.  But three hours in the Royal Hotel in Taree has turned me round completely.  However, I promise never to get up to sing, simply for the protection and respect for the other patrons.

Why  SWMBO and I attended a karaoke night is a bit of a long story, so you will have to listen to find out.   We both loved the Thursday night karaoke in the Royal Hotel in Taree, where I learned many things and was forced all my preconceptions about karaoke.  And you can't beat the five dollar Bangers and Mash meal for value.

The folk who got up to sing were not drunk twenty and thirty year olds.

The singers were not in the least part competitive.  There was definite goodwill and support for folk who were nervous or new to the scene.  And Dennis, Raquil and some of the regular singers volunteer their time and talent to support their broader community, I didn't reckon on that.

Dennis and his wife Raquil run Party Time Karaoke, which is a commercial business.

They own the necessary equipment and market their services to hotels and clubs, as well as individuals for weddings, birthdays, and divorces.  Companies engage them for sales training and team bonding exercises.  If you think this could work for you call Dennis on 0413 399 498.  He is very professional, has excellent gear and will go out of his way to accommodate your needs..

Back to the Royal Hotel … I asked Dennis how many songs he had on his computer and the answer floored me.  If you want to know, you are going to have to listen, but it is more than 1,000, more than 10,000, more than 100,000 – you will find out.  The tracks are all backing tracks of the original songs, and in some cases include the backing singers voices as well.

Listen to the session, the heart warming part that really made me think twice starts about two thirds way through.  You will love this episode,  just remember it is being recorded in the busy lounge of a hotel while the patrons are having fun.

Do you participate at karaoke nights?  Would you if you were given the opportunity? Leave a comment in the Reply Box below and let me know.”

This article first appeared at http://RetiredExcited.com