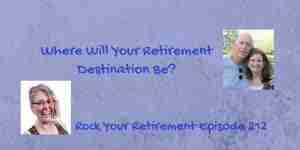 A move abroad may be the answer if you're hoping to further stretch your retirement dollars. Last week's episode of The Rock Your Retirement Show talks about the things you need to know before moving overseas. Today, we will discuss a very important subject on How to Decide Where to Retire, a great topic for your future retirement destination. Life in a foreign land offers a chance to see more of what the world brings to us and can offer a lower cost of living.

Things to Do Before Deciding Where to Retire

When Edd and Cynthia Staton realized that retiring abroad was their best option, they created a wishlist of everything that they’d be looking for in their retirement destination.

The cost of living was a top priority for them, they got wiped out in 2008 with the economic recession. Beyond that, they wanted to be close to their children who live in the US. That immediately made them focus on Latin America as opposed to the far east, which is too far.

They also like what they called “Goldilocks Weather,” which is a temperate climate. Not too hot, not too cold, and that was a driving force for their retirement destination. Another was healthcare. Edd and Cynthia were in great health but moving forward you would need good access to healthcare in whatever retirement destination you would choose. Also, access to cultural activities and a place with other ex-pats.

Deal Breakers on Your Retirement Destination

Deal breakers if the opposite of your wishlist. Edd and Cynthia didn’t have any but some people do have specific deal breakers. As an example, you need specific medication, everything is great about the country, but then you find out they don’t have that medication. It doesn’t matter how great it is, you can’t lose that medication you need. Another one would be mobility issues. If you have those, then you’re not going to pick a place of high altitude or places with handicapped issues.

How to Figure Out Your Destination

The English language isn’t really the determining factor for your retirement destination, but it is important. A good factor to look for is if there’s an established ex-pat community in that country of destination. Because if there is an ex-pat community then at least you’ll know that there are English speakers there. North American English speakers in particular, if you are North American.

A lot of ex-pats including Edd and Cynthia don’t collect Social Security checks in the country they’re living in. They maintain a US banking presence, have a check there, and just pull money out of the ATMs locally.

It starts with deciding what you want not what you’ve read about or think what other people want you to do. Once you’ve decided what’s really important for you.without any restrictions and judgment, then that’s the time where you can choose the right retirement destination for you.

When choosing your retirement destination, think about these considerations: 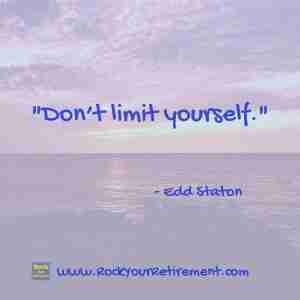 Figure out as best as you can what your retirement income is actually going to be. Go to the Social Security website and they can give you an estimate of the different levels, your monthly benefits, and with that combined with your savings, you can get a rough estimate on how much you would spend every month. Moving abroad is a capital preservation strategy. Be open-minded about this whole topic. A lot of people are held back by different kinds of fears, but it’s not that scary.

Here are the countries with the most U.S. retirees collecting Social Security by Catey Hill