Your Medications Can Cause Dementia – Ep 196 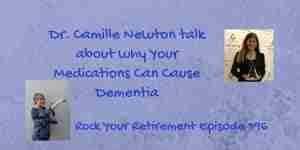 This episode is from the vault and was first released November 20, 2017.

Dr. Newton wants to educate people on how medications can cause dementia. Also, how to avoid these medications.

The only thing worse than having dementia is taking care of a loved one with dementia.

Many people do not realize that many medications can cause dementia.

Dr. Camille Newton is a home visiting physician. You may also know it as a traveling doctor or mobile doctor. It is such an important service for seniors that are not able to travel for the doctor’s appointments. She focuses on minimizing medications. Especially psychotropic pharmaceuticals, to help senior brains stay healthier longer.

While performing house calls, she has seen the effect psychotropic medications have on people who take them for a long period.

Some examples of psychotropic drugs are:

These are some staggering and scary statistics!

According to Dr. Newton, using Benzodiazepine increases the risk of Dementia. Nearly tripling risk within 3 years. Quitting reduces risk over time, to only 10% 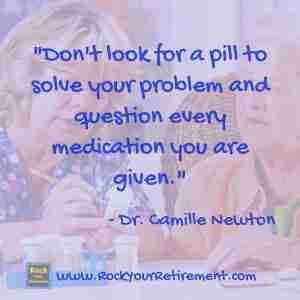 increase in risk 3 years after quitting. Benzodiazepine use quadruples the risk of suicide in the elderly. In one study, Benzodiazepines and hypnotics increased suicide risk by 14 times.

Antihistamines can have an anticholinergic effect. This means some of them block a certain neurotransmitter called acetylcholine. This can have a detrimental effect on the brain over a long period. This includes Benadryl.

In monkeys, laboratory rats, and humans, antipsychotics such as Haldol showed a huge measurable shrinking of the brain within 8 weeks of use.

A person goes to the drugstore and they have allergy symptoms. They could choose Claritin or Allegra (which are not anticholinergic). Also, they could choose Benadryl or Coricidin and end up with dementia within a few years.

Dr. Newton tells a fascinating story about “Pam” who has a rare case of dementia reversed by getting her off of her medications. Although she has had only a few cases of ‘total cure’, she's had many patients improve when taken off from anticholinergics. These medications are so dangerous to our brains, and yet there is no warning label.  Many of them are over the counter.

A lot of people ask Dr. Newton, “What Can I take?” Her response is, don't look for something to take when you are having a problem. Don't look for a pill to solve your problem and question every medication given.

*Please note: Neither the Rock Your Retirement Show nor the host, Kathe Kline provides medical advice.  Please consult your own practitioner about any healthcare issues that you have.

Dr. Newton cares for complicated elderly patients in their homes through her medical practice, Home Excel Physician’s Group. She is also the founder and former president of Pure Wick Corporation. It's a manufacturer of non-invasive, external urinary catheters for women. (Pure Wick was recently sold to C.R. Bard). An Attending Physician for Camp Pendleton Naval Hospital Residents in Family Medicine. Also, for Kaplan University School of Nursing. She is board-certified in family medicine. A Member of the American Academy of Home Care Physicians, and a Gulf War Veteran. She is also an Athena Pinnacle Award winner. This is an honor given to exemplary female executives in San Diego–for ‘Women who Champion Women’. She studied Genetics at U.C. Davis, where she graduated with honors. She completed her medical education at Saint Louis University and Residency at U.C. Irvine.
A home visiting physician that focuses on minimizing medications to help senior’s brains stay healthier longer. If you would like to reach out to Dr. Newton, her email is [email protected]
Click on this link for today's Freebie: http://rockyourretirement.com/Medications
Did you know that medications can cause dementia? Are you or someone you love taking any of these? Tell us your story below in the comments.