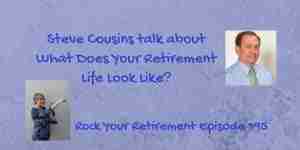 This might be a hard question for some people, but let's face it, what does your retirement life look like?