Weightlifting at an Older Age – Episode 169 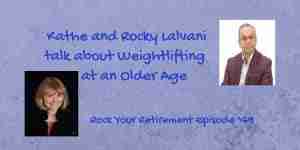 Rocky Lalvani is back with us in this episode of Rock Your Retirement. This is part 2 of the 4 part series with Rocky and today we will be talking about why older men should lift weights. In this episode, we will share to you why it is important to lift weights even as you age.

When you are young just the thought of starting to lift weights is hard and it's even harder if you try to begin weightlifting at an older age. Though it's hard for elderly people to start weightlifting at this point in time, it is still necessary. And the truth is that building your muscles is more important than ever at this stage of life. Muscles tend to weaken with age, and this decline can eventually rob seniors of their active, independent lifestyles. Fortunately, you can reverse that trend with a few simple exercises. It's safe, it's effective, and it's never too late to start. Because you'll never know, you may even enjoy it.

The Benefits of Weightlifting

Myths of Lifting Weights at an Older Age


People of older age need to stop thinking about not being able to build muscle after a certain age. Well, this isn't about measuring how much muscle tissue you have or put on. It's about getting fitter and stronger.

And when elderly people lift weights, they get stronger and more able-bodied. Therefore, a frail elderly person can get stronger. Lifting weights will make everyday living easier for the elderly woman or man. Moreover, the only people who can't build muscle from exercise are those who aren't with us anymore.
Some older people believe that lifting weights will make them too bulky and get stiff muscles. But in reality, most of the people in the gym that can lift the most weights are those who are slim and trim. They aren't really muscular. That's one of the fallacies that are out there that if I lift weights I'm going to be muscle-bound and that is not the case.

A couple of reasons why the machine weights don't work is number 1, most often you're in a linear track. So you're only moving up and down. You don't work any of the supporting muscles at all that would have to keep your weight from going side to side. You're not getting any of the supporting weights that are going on. Most of the machines that are out there are highly specific to a muscle or a group of muscles. That is why when I'm doing a squat or a deadlift I'm using my entire body all the way across. And using most of those machines in the gym is just not the same as free weights.

What Will a Senior do to Get Started?

Free weights are very scary in the beginning. But getting a good trainer is a big help, someone who could teach you do the form correctly. And try not to lift weights more than you can lift. Don't try to be that person that will go all out and do it all. Because you are better off lifting half the weight that you think you can get comfortable with. Time will come that you'll get by those weights that you are vying for. We are not trying to be Olympic bodybuilders. We're just trying to get our body to be strong and muscular. So as we talk about in the last show when you wanna go play with the 5-year-olds and run around the ground and lift them up, you'll have the strength to be able to do that.

People of older age kept on saying there's so much to do. I think it comes down to three simple exercises. If you can do a squat, a bench, and a deadlift, those three are the ones that make up the trio. You don't have to do anything else. They use a good amount of your entire body to be able to function, to be able to do that. And you work your whole body systems with those.

Therefore, if you got X amount of time to spend, do you not want to get the most for your time. And if you want 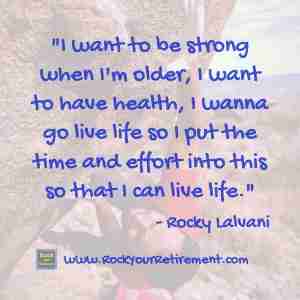 the most effort of your time free weights are gonna do that. Even if you use 10-pound dumbbells. You will do more on 10-pound dumbbells than on a machine. You'll get more strength and more stability and especially more crossability. Age is just a number. As we get older our fall risk goes up, we get tighter, so we're not as flexible as we use to be.

For people of older age, strength training is a great way to not only help them stay active but stay independent as they age. Elderly people should lift weights. It's that simple. This doesn't mean try to exercise like young adults. It means get in the gym and start using the equipment and start out lightly.

Why Older Men Should Lift Weights