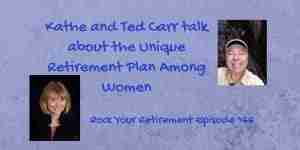 My guest co-host Ted Carr is back with us to talk about why retirement planning among women is unique. Ted Carr has been on the show previously. We discussed the Stages of Life which happened to be one of our most popular episodes.

The subtitle to today's topic should be, “Why is it retirement planning for women more challenging or poses more challenges?” Even in retirement men and women are different. Women have plenty of hurdles when it comes to their journey to retirement. There is no one-size-fits-all and this is why it is unique. We will break down what challenges women encounter when planning for retirement so that you can work things out toward a secure future.

Statistics show that women live longer than men. The average age women live to is 81 vs the average age for men of 76. It is not a secret that women have lived longer, maybe partly due to men's lifestyle. Although men are catching up because women's lifestyles are going downhill. Women have more years of the retirement fund. It increases their longevity risk, which is the risk of outliving your money.

When I was in my 40's I purchased a long-term care policy. When I got married 10 years ago, I added my husband to the policy. But you cannot buy this policy that I purchased anymore. A lot of people don't buy long-term care because it is expensive. The reason why it's expensive is that a lot of us are gonna need it because we are going to live for a long time. I included home health care in that policy because the thought of moving into a nursing home does not appeal to me.

Women earn only 81% of what men do. That gap can be explained in part by women’s time off to raise their children, but it’s also because of occupational segregation.

My mom took a job in retail and there wasn't a lot of career advancement or benefits. Except that she could take time off pretty much whenever she wanted to and that fits in with her lifestyle. It didn't provide financial rewards but provided a lot of lifestyle parenting rewards. But you tend to fall behind because you're not out there grinding it out with other people working diligently to get ahead.

Women are not necessarily as intense negotiators as men are. In Linda Babcock's research, it indicates that women who consistently negotiate their salary increases, earn at least 1 million more during their careers than women who don't. Women undervalue themselves they often feel grateful to just have a job and underestimate their market value by up to 30%.

Women are more likely to become caregivers to their aging parents or children than men are. This affects their career, or they may even have to quit their jobs. This also affects their overall lifetime savings, social securities, pension benefits, and also 401k plans. That's just another challenge that women face financially. There is also the societal pressure of being the person in charge of taking care of the family.

Ted says that he and his wife keep their finances separate. 56% of married women still leave financial planning decisions to their spouses. When the divorce comes around what are the surprises? Hidden spending, hidden debt, hidden accounts, outdated wills where the beneficiaries are all messed up. 94% of widows and divorcees would insist on financial transparency with their spouse.

Overall, a lot of women do not save or do not save enough, because they were caring for their family members. They also save for college for their children and by the time they start saving for themselves, it is too late. That is why so many older women live in poverty.

One of the things that I encouraged people to do is location arbitrage. Meaning, you can live somewhere else

There is also the “Golden Girls” model. That is a model where people come together, women in this case single, divorce, or widow and they live together. It's cheaper to pull the resources and share these expenses and it provides you that buffer from becoming isolated which is so important from the nonfinancial side of retirement.

Every retirement plan is unique and crucial, it's up to you how to pull through that uniqueness upon retirement. Retirement planning for women is an important financial milestone and should be planned carefully. Women need to pay more attention to their retirement and finances so you can walk into your sunset years financially secure!

Ted Carr retired from a biotech company in San Francisco when he was in his mid-50s.  He had a difficult adjustment in the beginning but was able to get through it.  He started writing about the 6 stages of Retirement.  Many people over the years asked him how he was able to retire so early so he started a podcast, which is now completed, called retirement journeys.

Now he has a new podcast called Retire Hoppy where his guests talk about a retirement subject while sampling beer.

Articles mentioned in this episode:

Why Retirement Planning is Different for Women

Retirement Planning is Hard, But It Can Be Harder for Women

The Single Woman's Guide to Retirement