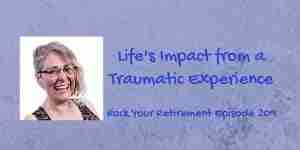 Today's show is going to be a little different from normal so if you are new here, be aware of that.  I'm going to share with you a traumatic event that I experienced which made me think of how we can make our lives a little better. We've been on a hiatus for the last few months, with either replays of previous guests, or with me releasing shows where I was the guest.  I hope you've enjoyed them.

Also, I'm going to be a little graphic in this episode.  If you have little ones in the car with you, you should either have them put on headphones or else wait until they are gone.  I'm getting into some scary details so be sure you don't let the kids listen.  And if you have tender ears, you shouldn't listen either.

A Year Has Passed

It's been a year since we left our home in San Diego and moved across the country to South Carolina. We left San Diego for a couple of reasons, but the main was to be closer to family.  Les's family is all on the east coast and being all the way across the country meant that we rarely saw them.  In the ten years, we were married before the move, we saw his family three times.  Two weddings and a funeral.

We did a whole series on the search and the move, so if you'd like to learn more you can listen to the series of episodes called 55 Plus Community search.  There are four in the series, and they were released starting Feb 4th 2019 and ending on Feb 25th 2019.  The first one, released on February 4th, 2019, talked about What to Compare.  The second, released on February 11, 2019, talked about the Community Tour we took.  Then we released on February 18th, 2019 called We are Home, which discusses why we chose this community, and then on February 25th, 2019 we released the final episode called Mixed Feelings.  If you are considering making a move, I encourage you to listen to all four in the series.  Leave a comment on those shows if you have ideas about this topic.

Then the Traumatic Experience Happened

This was a really traumatic experience for me, and I'm having a hard time controlling my emotions during this episode. Les and I were at a red light and right in front of us we 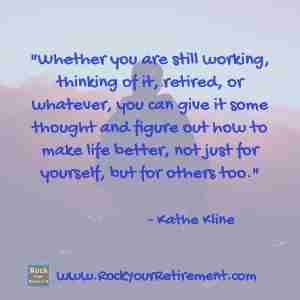 saw a man get killed. He was on a motorcycle going straight and a woman in a car turned in front of him. This is how a lot of motorcyclists get killed. I did something dumb.

I jumped out of the car, right out of my sandals, and ran across the street barefooted. This was really dumb because it was hot out, and there was glass everywhere.  But I wasn't thinking about my feet just then. I knew that we couldn't move him so I told the lady that we were not moving him, because he could drown in his own blood.  I know that's not the only reason not to move someone after an accident, but honestly, that's the only thing I could think of because of this traumatic experience.

This Traumatic Experience Had a Huge Impact on Me

This traumatic experience made a big impact on me, as you can imagine.  I had to record this episode several times before I could get through it in a format you could listen to.  It happened months ago and I still can't get through the story.

It made me realize that no one knows how much time they have left.  No one. Anyway, after we got home, I started thinking about my life.  If you're a regular listener of the show, you already know that I started this show to help ME retire someday.  I mean, Les and I are already financially independent but I can't seem to pull the trigger.  Les says it's because I wouldn't know what to do with myself.

But that's not true.  I DO know what I would do.  I would start back with my art. Probably spend more time on this show.

Les and I are doing great.   You wouldn't know about his cancer unless we told you.  As far as the move, we have our issues with this place, but it's pretty good.

Sometimes a traumatic experience helps you realize what you want to do in retirement. Whether you are still working, thinking of it, retired, or whatever, you can give it some thought and figure out how to make life better, not just for yourself, but for others too.