Adults in their 30s – 50s have parents age 65 and older and are either raising a young child or financially supporting a grown child. With an aging population and a generation of young adults struggling to achieve financial independence, this stress takes a toll not only on personal relationships but also affects the relationship with their spouse, children, and family. But living in a sandwich generation can also provide you with benefits.

If you're living in a multi-generational household, you must listen to this series. In today's episode, we'll talk about what exactly is the sandwich generation and what issues are you going to face if you're taking care of both your parents and your own children.

My guest today, Tae Kim, is a blogger. He writes about navigating the intersection between personal finance and being part of the sandwich generation. Tae and his wife live with their aging parents while raising their own children and building their careers.

How Their Sandwich Generation Started

Tae and his wife have been cohabiting with their parents for about six years now, so what triggered it was actually when his wife was pregnant with their first. Like any young parents, they were trying to figure out what to do with child care. Tae’s father approached them and said, “Hey, I know you guys are thinking about wanting to get a house, we can help out with the down payment but we come with the house”. So, they took the offer, and it was also an opportunity for them to lower their housing costs as well as spend time with the grandkids and help them out.

The Usefulness of Being in a Sandwich Generation

When Tae and his parents started cohabiting together it was very useful, especially when his mother was around. You trust your mother much more than a stranger that you hire. But they still did hire a helper for her, because it has been physically hard for Tae’s mother to take care of an infant. But then just the fact that she was there, watching over about everything gave them a lot of comforts. That definitely was a huge benefit of living together, because Tae said they would have been scrambling in the morning to either have an in house nanny or like drop the kids off out at a different location.

It Can Help Ease the Burden at Home

Tae’s parents help out with dropping them their kids and picking them up on the days that Tae and his wife were not around, but because they do not have to watch the kids 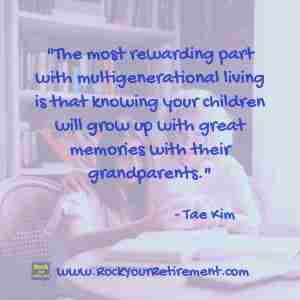 all day, it's not physically draining. So it's really just helping out with our morning and the afternoon, but for them, it’s a huge help. Just the fact that someone can, when the kids wake up, help with just dressing them, feeding them, dropping off to school, and picking them up, that's a huge help, as they are able to focus on their careers because it would be really challenging. Tae tried doing what their parents did when his parents weren't around for about a week. He tried dropping the kids off at school and picking them up, and it was so stressful.

The Sandwich Generation Energizes Your Parents

To see your parents strong when you're younger and then to see them getting weaker as they get older gives a great deal of impact in you. But when they are with their grandchildren, you just kinda see this sense of liveliness, that just they can be children again and that just gave them a sense of energy that just increases when being around younger children who are also energetic.

Being a member of the sandwich generation can offer a wide variety of benefits to all the members of your family, but that doesn’t mean you need to take on all of these responsibilities on your own. As time goes by, things change and so will your life’s circumstances. Find out as much as you can about balancing your life during the sandwich years.

Tae is the blogger behind Financial Tortoise.  He writes about navigating the intersection between personal finance and being a sandwich generation.  Tae and his wife paid off $105,000 student loans in 3.5 years while growing their families, cohabiting with his aging parents, and building their careers.