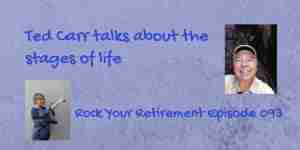 Ted came onto my show as a guest to talk about stages of life, namely the 6 stages of retirement. Mr. Carr is a podcaster himself, with the show, Retirement Journeys, which discusses similar topics as this show, but he also includes financial topics on his show.

In case you're wondering, the stages of life (retirement life) include:

Ed was young (mid-50s) when he retired in 2010 from a biotech company in San Francisco.  Because so many people had asked him how he was able to retire so young he decided to take his story online.

Let's look at some of these stages of life that Ted went through:

This is the time while you are working that you are saving and investing for the time when you will be able to stop working.  Ted did a good job at this, or he wouldn't have been able to retire in his mid-50s.  Many people don't plan far enough in advance, for whatever reasons, and so the other stages of life become more difficult for them.  However, that's not what the Rock your Retirement show is all about so we'll let you reach out to your financial adviser for help with this.

This is fun for most, but can be the shortest stage of life (retirement life) for many.  That's because it's really only a day, a week, a month, or six.  A retirement date.  The retirement stage of life is the party.  You may go out to dinner with your work buddies.  Or you might have a cake on your last day of work.  The parties, balloons, and dinners have become a rite of passage for our actual retirement date.

It can be a second “honeymoon” where you hike, garden, bicycle or create art.  Many people read or catch up on their yard work.

Ted took the “honeymoon” path when he first retired, and he describes this in his blog:

“After I retired in May 2010, I took the “honeymoon” path. In Retirement Journeys, I refer to this as “Arriving in Retirement”, a bridge from work life to retirement life. My wife and I moved from the Bay Area to Arizona in June 2010. Our first few months were spent settling into a new house and community. We had many home improvement projects to work on. We returned to the Bay Area frequently. When I look back at our calendar, I am reminded of the variety of ways that we spent our free time. We attended financial seminars, concerts, car auctions, baseball games and community-based meetings. In May 2011 we bought hybrid bikes and began riding once or twice a week”.1

But there is only so much hiking, gardening, and bicycling you can do. So that led Ted to the next stage of retirement:

This is the letdown stage of life.  The honey moon is over.  It's when many retirees become depressed. They can feel lonely, bored, useless, and disillusioned.  When they were working, people returned their phone calls.  People respected them.  Now, in this stage, many feel disrespected.

It's this stage of life that the Rock Your Retirement show tries to help out.

Ted went through this stage too, as we discussed in the interview.  In 2011 he started worrying about whether he had made the right decision.  He didn't feel productive and started writing in his journal to vent. For many, when they hit this stage, marriage problems can ensue.And it was affecting Ted's marriage.  So he  looked at some preemptive steps:

Because Ted had started the look inward in this stage of life, he was able to progress to the next stage of life called re-orientation.

Not everyone gets to this stage.  In order to get through it, you need to re-examine your role in life.  You need to ask yourself what your new purpose in life is.  And you need to find out if you are still useful in some way.  Ted had to answer the question, “Who am I, now?”

Before he could answer that question, Ted took inventory of his life.  He needed to find out why he was so unhappy.  Was it missing his paycheck? Missing the actual work itself?  What was it?

In Ted's case, he discovered that he had negative feelings toward his alcoholic father.  He read the book, Forgiveness is a Choice, by Robert D Enright. He worked through its exercises.

Ted started volunteering at a local museum.  It gave him purpose and responsibility.  This helped him ease into the next stage of life, retirement routine.

Mr. Carr calls this “Retirement 2.0”  This is where you are living a comfortable and rewarding lifestyle.  It can mean a daily run, volunteer time, or whatever your daily routine is.  For Ted, it means working on his podcast, his blog, and his volunteer work.

Thank goodness Ted hasn't reached this stage, but he lives by the quote, “Dream as if you'll live forever. Live as if you'll die tomorrow.”  James Dean

Ted Carr can be reached at www.retirementjourneys.com