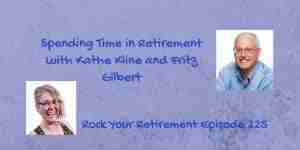 Today we're talking once again with Fritz Gilbert. He came on our show last year after he retired. And we invited him back to tell us how it's been going two years into retirement. Fritz was on episode 198. So if you haven't heard it, go back and listen to it, it might be surprising to find out what's changed.

Fritz created a retirement jar before he retired so he and his wife could put whatever they want to do during retirement. That helped them think for a year before retirement about the softer side of what are they going to do in retirement. And just going through that mental exercise of thinking of activities, probably paid more benefits than anything else through the process.

Also, it made them aware, because you're constantly on the hunt for something to do in the area, so you can add it to the jar. Inevitably, they've done a lot of things that probably each of them put in the jar without actually pulling the paper out of the jar. When looking for things to do, it has led them to do some activities that they wouldn't have been aware of. There's some tremendous benefits as a result of doing it.

Don’t Get Over-Committed in Retirement

Fritz was thinking about joining rotary but ended up not doing that. Part of the balance in retirement is not getting over-committed. He's starting to feel a little bit of commitment pressure and was doing a little bit too much.

Fritz was starting to get a little bit of stress about keeping up on his blog and emails. So what happened, he has been intentional now on being very selective about what he gets engaged in and being more willing to say no.

We've got to be careful with our time and make sure we really get the most out of these precious few years that we have when we're financially independent, and young, and physically able to do the things we want to do.

Les and I did kind of the same thing when we moved to this 55 and older community where we live, which has over 100 clubs, over 100 groups. We decided that we weren't going to join every club that we were going to hold off on joining until after we've been here a year.

When you have had no time to plan for retirement, you didn't really see it coming and suddenly, you're retired. Those are typically the cases where people can really go through a tough time.

Retirement is a Rare Opportunity

Retirement is such a rare opportunity to do something for the first time in your life. Since you were, you know, in kindergarten, probably you've always had people telling you 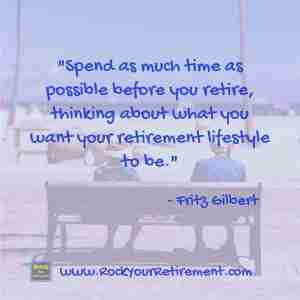 what to do. You've always had to do what you've had to do for the paycheck. Now, that's all behind us and what a golden opportunity to do something for non-financial reasons, just because it's something that you're passionate about, and yeah, it's kind of hard.

To figure those things out, passion is one of those kinds of nebulous words of purpose. But the people that are really successful like Fritz’s wife with Freedom for Fido, those are the stories that we should strive to replicate because that really is living a successful retirement that's rocking your retirement,

Fritz Gilbert is the Founder of The Retirement Manifesto, a personal finance blog focused on Helping People Achieve A Great Retirement.

Fritz and his wife enjoying traveling cross-country in their RV to spend extended visits with their new granddaughter. They also commit extensive time working for Freedom For Fido, a non-profit founded by his wife to build free fences for low-income families who keep their dogs on a chain (www.freedomforfido.com).

You can find him at https://www.theretirementmanifesto.com

Keys to a Successful Retirement: Staying Happy, Active, and Productive in Your Retired Years
RockYouRetirement.com/VPN