Let's talk about SCORE with Sally Broff. You can listen to the show at the bottom of this page or on your smartphone. 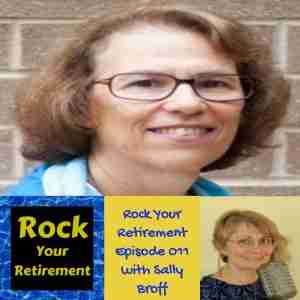 Raised in the Pittsburgh area, she left for college in 1967 attending Brandeis University. She followed that with a master’s degree at Boston University. Sally lived in Boston until 1993, working for some very small manufacturing companies.

In 1986, she and her partner founded a manufacturer's representative company specializing in selling power sources to manufacturers.

Then in 1993 she sold her portion of the business to her partner and moved to Southern California where she and her life partner founded a company. They ran that company for 10 years and sold it in 2007.  This is where her retirement began.  After that, Sally joined SCORE, a national organization that serves small businesses.

Sally and Bob, along with two other couples in their community, exercise every other day. Their ages range from 60 to 80 years old. Exercising helps keep her healthy, helps with balance and her core strength.

She wishes she knew that in retirement she could stay so busy. Sally was worried she would end up being a couch potato with nothing to do.  She recommends that you find something that gives you the feeling that you are still making a contribution to society.  This can be a hobby, volunteer work, or even a new business venture.