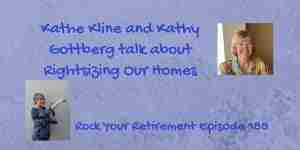 The size of our house is critically important when you are rightsizing. The reason Kathy called it rightsizing rather than downsizing is that she thinks it’s all very individual. What’s right for you might not be right for me. Also, rightsizing isn’t a sacrifice; instead of a downgrade, it’s an upgrade. The article, Think you need a 2000 sq ft house to be comfortable? Think again! talk about the benefits of rightsizing for you and your family.

A vast majority of us live in a tiny percentage of our actual square footage. Mostly when people come over, we just hang out in the kitchen or dining room. But the guest rooms or all these extra rooms and anything formal gets seldom used. That’s where so much of the square footage of the house goes to all those things that aren’t being used.

In my old house, we had a parlor, a formal dining room, and a breakfast area. We only used the formal dining room 3 times in the whole 10 years that we lived there. I never used the parlor; My husband would go in there sometimes to play the piano. These were probably 600 square feet that we never used.

Rightsizing Will Work for You

It’s actually a habit of buying bigger houses. When you started looking, you think in your mind, “Oh, I need this much space I’ve always had.” And Kathy thinks it’s very common for us to think, “If you are a hammer, everything looks like a nail.” You are so used to looking at what you have become comfortable with. You don’t think, “Maybe you don’t need all that much space. Maybe I should look at homes that are much smaller than I’m accustomed to.” Kathy started out with a 2,400 square foot house and they ended up buying a 1,400 square foot house. She didn’t even think there’s any way in the world that she could live in a 1,400 square foot house. But now she can’t imagine living in anything bigger because they definitely rightsize into it.

The Secret About Bigger Houses

Builder’s make more money when they sell you a bigger house. When they go mapped out a development, they want to squeeze as many houses as they can on the deluxe that they can get. Also, the bigger the house, the more they sell for it. Most houses sell for price per square foot. They’re very invested in trying to get you to want a bigger house because they make more money out of it.

When Kathy downsized, she used the equity in their house and paid off their home, so it’s free and clear. She would rather have a tiny house rather than 2 or 3 times more and have a mortgage on it that you constantly have to keep paying on.

Our HOA fees are $285 a month, meaning that we moved for a more expensive area. Les and I moved to Sun City for the amenities. We have a 4-part series on our search for our new home. Here, they have great amenities; they have over a hundred clubs. That’s why we moved here. And also, I’ve met a ton of people, but you have to pay for everything.

Let Go of It

It’s all the other stuff that we have to let go of including the square footage of our houses. Kathy listened to one of our episodes about Multigenerational Living. In Kathy’s 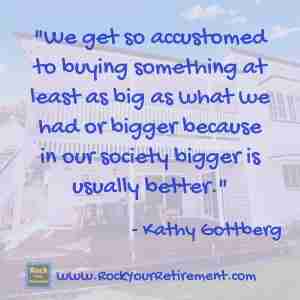 words, loneliness is a huge problem as people get older. That is why having people around you is a great way to use the space in your home. You can also rent out rooms or bring in family members. There's a lot of ways you could still keep that house. That is rightsizing for you but it’s not eating your lunch or it’s not just setting their dead space.

Kathy Gottberg is a published author of six books along with numerous magazine articles and her blog http://SMARTLiving365.com where she explores ideas and experiences that help to create a sustainable, meaningful, happy and rewarding life for herself and others.  Since turning 60, ideas surrounding positive aging and retirement have increasingly captured her interest.  Kathy lives in La Quinta, CA, with Thom, her husband of 41 years, and dog Kloe where they do their best to live joyfully and SMART, 365.

She has also been on our show before having great insights on episodes 135 and 157.

Think you need a 2000 sq ft house to be comfortable? Think again!
MedicareQuick.com/checklist