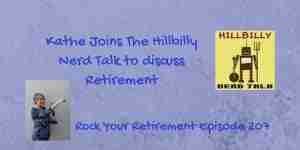 As we’re getting ready to make major life changes, we’re consulting with an expert on making the next phase of life the best it can be. Kathe Kline of RockYourRetirement.com and The Rock Your Retirement Podcast joins us to talk about more than finances moving into “after work years”. Kathe shares with us great tips about being prepared for retirement, planning together, not being tied to “stuff”, and Meetup.com.

There are so many people that don’t want to retire. Take my husband, for example, Les is financially able to retire, he doesn’t work per se, for money, but he does a lot. He’s on the board of a couple of companies, he does a ton of work even though sometimes these companies make money than we’ll get something for it. He’s considered retired, but he’s not sitting around watching Westworld. You got two types of people. People that can financially retire and people that have done nothing. People who have done no thought at all are hurting.

In one of my episodes, Wendy Holt made a career change. She was living in Los Angeles and she was in a high-powered job then one day. She just said, “You know what? We’re moving.” So, she and her husband moved to Costa Rica together. Giving up their jobs in the States. The result was that she is loving the move, having a bed-and-breakfast. It’s kind of like she can work whenever she wants. But even though she’s having a great time abroad, she gave up a lot of stuff. In Costa Rica, they don’t have the Internet the way that we do and they just don’t have what we have here. There is something to be said to somebody who can do that, who can say goodbye to all their stuff.

Hank and Petra live differently than most people in their socio-economic place. Hank drives a 12-year-old pick-up truck named Elmer. Things like that, they can see what Wendy Holt is going through and they think they too could have retired early because they don’t live in extravagant lifestyles.

Getting Rid of Unwanted Stuff 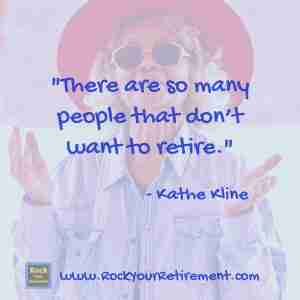 On the Rock Your Retirement Show, I also talk about how to get rid of unwanted stuff because we are emotionally attached to our stuff and some of those have personal memories for us. The problem is how are we going to get rid of those stuffs, because at some point you’re either going to move into a smaller place or you’re going to die and then somebody else is going to be stuck going through your stuff.

I have so many friends that over the years; They got a new car every two to four years. And I’m like, do you realize what an impact that is putting in your life and not only that, you know how many marriages break up. A lot of that has to do with money stress. People are just stressed out. When you have the house, car, cable payment, the payment on your boat, your storage building, all these payments it adds a lot of weight on your shoulder.

When you are debt free, that removes the stress off your shoulders. Less stress on your relationship, less stress on yourself, you are probably not going to get sick. Just like cancer is caused by stress.

There’s a site called Meetup.com, and I had 3 guests on my show talked about it. Basically, Meetup is a place online to meet in person. Let’s say you want to write a book, you can start a Meetup for aspiring authors and you can get together once a month or whenever you want. When my husband Les and I got married, we didn’t have a lot of couple friends. So, I started one which is for married couples or people who have been together for two years and we met a bunch of friends that way. You can do anything you want like going to free concerts or tennis. The person who starts the thread will be the one to pay for it and it's about $15 a month. If you want to find people that are in your same situation and want to do the same things, I highly recommend it.

If you don’t have that need of being able to put clothes on your body, food in your might, or a roof over your head, you’re not going to be worried about Meetup. You’re not going to be worried about some other things that I talk about on my show. But, if you have that taken care of, if you got the basic needs then there are other needs that you need to be met and no one’s talking about it. That is why I do talk about those things. I’m not an expert on that field but I have guests on my show that can share their thoughts about retirement.

The Go-Go Years – Meaning you’re off doing things, taking trips, you’re learning and all that kind of stuff. Those are the Go-Go Years because you are going.

No-Go Years– That’s when you’re too frail to go.

While you’re still young, that’s when you want to do the things that you want to do. Get out there and do whatever makes you feel alive.