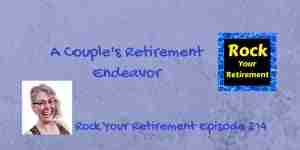 Background of the Show

I'm so glad that you've stopped by.  Below is a “transcript” of this week's show, Listener Question: A Couple's Retirement Endeavor. It's not word-for-word because we wanted to make sure it is in a readable format.  I recommend that you listen to the episode if possible, and you'll see the links to do that on this page.

We've been producing this podcast for you since 2016.  This show addresses topics that most shows don't.  We talk about retirement lifestyle and retirement endeavors.  When we started this show, there literally weren't any other shows in this genre.  I know because I searched for them.  These are the topics I wanted to listen to but I couldn't find any.

Then other shows I found started with similar topics.  I was happy to see that and reached out too many to see if I could help. You know a rising tide lifts all ships.  I was hoping that eventually, retirement lifestyle would be its own topic. Sadly, many of the shows I tried to help have gone off the air.  There are new shows now, ones I listen to that have huge audiences.  But they aren't as targeted as us.  You know, the Baby Boomers with a few Gen Xers mixed in. A lot of these shows are targeted at the FIRE community. FIRE stands for Financially Independent Retire Early, Mostly 20s, 30s, and 40-year-olds.

The Rock Your Retirement Show has covered a lot of topics.  We've talked about what to do when your mom needs assisted living.  Whether you should retire overseas.  And yes, we've even talked about dating and sex.

Retirement Endeavor (as a couple)


A lot of us may struggle to find common ground with our spouse or partners in retirement. Sometimes they may have different needs and wants than we have.  Although we may have been together for years and years, retiring can put a lot of stress on a relationship and having the same retirement endeavor can be difficult. That's because we've been together, but also alone, and we've worked that out.  It can be tough when we retire, because now we have all the time in the world, but our loved one doesn't necessarily want to do the same thing we want to do with all that time.

That's what is facing our listener today. She wanted to work a seasonal job, that's what she wants for her retirement endeavor. Our caller is having a problem finding things to that they are both passionate about. Also, she wanted to know how other retirement couples have managed to both find a very meaningful seasonal work effort together.

Responses from our Rock Your Retirement Experts:

I reached out to two of our past guests for expert advice on the subject.

Janelle Anderson, who's been a frequent guest on the show, weighed in on Shirley's question:

I would suggest that possibly look at your strengths one person might have a strength that they can bring to the business or the idea and the other person could bring a different perspective or strength to it.

It's actually hard to say if I don't know since I don't know the particulars of what you want to do. So I'm just kind of guessing but let's say one person has the idea to make jewelry and create this business and the other person doesn't really want to make jewelry, but maybe they have an expertise in marketing or you know, getting the word out about it, or maybe they're really good at doing the bookkeeping.

So, each of you might have a strength you could bring to it. My husband and I've done that before where he was strong in one thing and I was trying and something else and the other idea I thought of was perhaps each doing your own thing but supporting each other.

That's what my husband and I are doing. He has his own business, and I have my business. It's not the same business but we support one another in it because he's doing what he loves and I'm doing what I love. So those are two ideas. Hopefully, that's helpful. I really believe that if you're doing what you love and that you're passionate about it, then you'll be happy and fulfilled, and it doesn't have to be the exact same thing as your partner.

I think what Janelle was saying is to try to find the strength that your husband could bring to the opportunity that you are seeking for your retirement endeavor.  For example, let's say that you want to do seasonal work at a summer camp for kids.  You might want to be a waitress so that you can socialize with all the kids and other the workers.  But perhaps your husband is an introvert and the idea of that just doesn't sit well with him.  I think what Janelle was saying is maybe you can help him find something at the summer camp that he would like to do. Find something that suits his retirement endeavor. For example, if he's really into computers, maybe he could help the kids with that.  Or perhaps he has an eye for marketing.  Maybe he could help the marketing team for the summer.

In other words, the work he doesn't have to be the same as what you are doing or maybe there is a different volunteer program that would make his heart sing.  For example, perhaps he's always wanted to try out living in an RV.  There are programs you can volunteer for that are helping the public parks.  Some of these pay and some of these don't. So, see what he's excited about and try to tailor the experience to him.

Joyce Richman, another guest on the Rock Your Retirement Show, had a different answer.  Here's what she said below:

I was interested in your question because you're seeking an opportunity. It sounds like joining your spouse in a retirement endeavor, whether that's part-time work or volunteering. And you ask how to other couples do it. If one of those two is interested in this particular opportunity and the other not so much.

My hunch. Is that for most couples, there would be one person who would be yeah, I'm really into it and the other one not so much because you're very different people. You came together as a couple because you had very different interests. This is the time to really explore the differences rather than trying to force a commonality or a similarity where it's just not going to be a good fit for both of you, which could make it or turn it into one that's not at all good for either of you. Focus on what is it that really interests you and why are you interested in it.

You probably have all kinds of stories from childhood, from growing up, from other kinds of experiences that tell you, this is the kind of stuff I'd like to do, or these are the kinds of people that I'd like to help, or this is the kind of difference I want to make in my community. Listen to yourself and listen to your own passion. Get in touch with people who have similar interests to yours. Let them know what you believe you could bring to the table. Ask them to a degree to which they believe that that could be a contribution. In other words, follow green lights.

I think what Joyce is saying is that you can spread your wings and do something different from your husband.  Your retirement endeavors don't necessarily need to be the same. It doesn't mean that you don't love each other, but it just means that you each have your interests, and you are free to explore them.

You both have ways to contribute and they don't have to be the same.

My Thoughts on Shirley's Retirement Endeavor 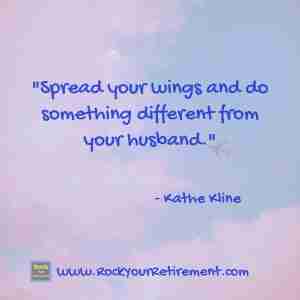 To our caller, first of all, thank you for the call.  It sounds like you've given that some thought.  It can be difficult when one spouse wants to do something and the other one doesn't.  Especially when it comes to seasonal work.  This is because seasonal work often involves travel.

Shirley, one thing that I was wondering, why do you want to do the seasonal work? Is it mostly for the adventure or is it for the money?

If it's for the money, then my answer is a little different from if it's for the adventure.  I know that in my family, I'm ready to travel anywhere, anytime.  I'd spend a year traveling if I could.  I'd be one of these people who live on a cruise ship so they don't have to move to assisted living.  Sign me up!

But my husband Les doesn't really like traveling that much.  So, I have three choices as far as I can see:

If you wanted to do seasonal work for the money, then you might not want to do it alone.  I can certainly understand that you wouldn't want to be off to summer camp working in the kitchen or in the dining room while your husband stays home and eats Bon-Bons.  I'm guessing that your desire to do seasonal work is more for the adventure than the money, so you might want to consider bringing him along, but you do the work on your own.  That way you'll get the adventure, and he won't have to work.  That might be a good compromise between the two of you.

Anyway, I hope that this helps you think about some options.  And for you, the reader of this post, or listener of this podcast, if you are interested in having me or any of our previous guests help you with a retirement lifestyle question, give us a call and leave up to a 2-minute question.  The phone number is (858) 876-2548.

If you have some advice for Shirley, leave it in the comments below!