Madilyn talks about Reinventing Life after Grief. You can listen to the show at http://rockyourretirement.libsyn.com/reinventing-your-life-after-the-death-of-your-spouse

I met Madilyn at the San Marcos Senior Center.   She stopped by my table and we started to talk.   This 78-year-old woman was such an inspiration I had to interview her!  She is the epitome of reinventing life after grief.

Her husband died after they were married for almost 60 years. 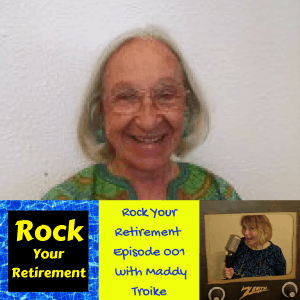 Stricken with grief, she didn't know what to do.  He was her dance partner, her business partner, and her friend.  They had

lived a wonderful life and had done almost everything on the 101 things on your bucket list.

Once he died, Madilyn didn't know what to do.  She had grown up with him; she had cared for him, and now he was gone.   As a woman of faith, she knew he was in a better place, but how was she to go on without him?  How was going to be able to begin reinventing life after grief?  They had been friends and lovers for such a very long time.

Her story literally made me cry.  I had to interview her so that my listeners could get over their own grief when they had lost a spouse.

After about a year of grieving, Madelyn decided that it was time to start living again.  She sold her husband’s tools and created a dance studio (for her own use) in the garage.  She started volunteering again at the San Marcos Senior Center, and she started taking care of her body and now runs 3 miles every day.

Madilyn is also an organic gardener and loves her pet turtle, Nessie, who has had 50 babies in the time that she has had her.  She's in a constant battle with the raccoons in the neighborhood, but thankfully, Nessie is too big for the raccoons to eat.

At age 78 Madilyn has also started using the computer and is now on Facebook so that she can keep in contact with her friends and family.

Listen to Madilyn tell her story of the two different worlds that she has lived in.  Her story will inspire you.

This article on Retirement Lifestyle first appeared on http://RockYourRetirement.com. ©2016-2017Maddy Troike shows us how she is reinventing life after grief