by Rocking Retirement Gal | May 23, 2016 | Podcast, Volunteer and Philanthropy | 2 comments

Podcasting in retirement? Let's take a look at how Frances ended up doing podcasts after retirement. You can listen to the show at http://rockyourretirement.libsyn.com/podcasting-in-retirement 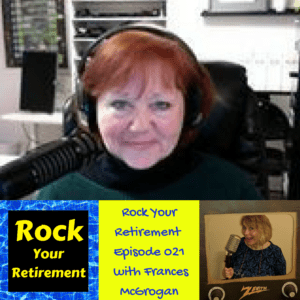 Would podcasting in retirement be a good way for you to Rock your Retirement?

Frances McGrogan was born in Ottawa, Ontario Canada and moved to England for 4 years in her early 20s. She got married to a Brit and then returned to Canada.  After a number of service industry jobs, in 1985, she joined the Canada Border Services Agency (CBSA) and worked there for 30 years. She learned to speak French when she was around 48 years old and became bilingual.  Frances was a senior HQ manager until she retired in January 2016 at age 55. She loves computers and tells us the story about how she became involved in that, but also has other activities that help her Rock her Retirement.

She enjoys playing darts with friends and even created a website for their dart games to keep track of players and stats.

Frances was fascinated when she saw her first computer in her office in 1986. She would start pushing buttons to see what would happen. Once someone told her to type in “DIR” (the DOS command for Directory) she was hooked!

She loves photography and is a contributing photographer on iStock photo.

Frances has been podcasting in retirement:

In fact, she and Kathe met at Dave Jackson’s School of Podcasting. and Frances has her own podcast called Stand Curious where she discusses people’s hobbies and interests with them with a goal to discovering new or unconventional things. She says she has interviewed some fascinating guests on her podcast, and she loves to learn new things about people.

Have you considered creating a podcast in your retirement?  This could be one way that you Rock your Retirement!

If you are stuck in retirement:
Frances says to look for new ideas and Learning something new.