Keeping physically active is a great foundation in aging well. Let's take a look at how Ed Elliott discovered that playing softball can not only keep you young, but can also help you meet and make a lot of friends. You can listen to the show at http://rockyourretirement.libsyn.com/playing-softball-to-keep-young-episode-005 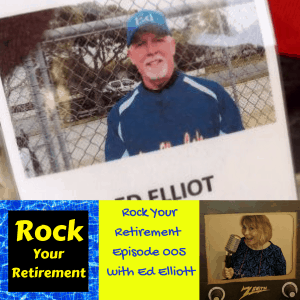 Today I spoke with Ed Elliott, who wanted to be a singing cowboy when he grew up, changed his mind to become a “cementing cowboy”, and then became a teacher.  He is now retired and is playing softball to keep young.

Ed retired from teaching severely handicapped children and then became a principal, hearing officer, and director of Special Education Programs. He worked in the industry after 40 years.

He and I have something in common as I worked for Harborview Developmental Center in Valdez Alaska right after high school, which was an institution for severely mentally disabled adults.  Harborview has since closed, and there are no more institutions such as that in the United States.

He planned for retiring when he was sixty-two until he went to a faculty meeting and found out that he should look carefully at the retirement chart and not to forget that he could retire at age sixty-one and a half, so he didn't wait.

Ed retired without a plan, except he needed to wrap up some loose ends, which he is still in the process of doing (aren't we all!).

Ed is Rocking his Retirement by playing softball to keep young.

He found the softball league in the newspaper.  He and a friend scoped it out first to make sure that there were no former star baseball players in the league!  It seemed fine, so they went to a batting cage to assess their skills.   They could both still hit a ball (after fifty years) so decided to purchase the equipment needed to play the game.

The average age of the players (which includes women) in his league is seventy-one.  The majority of the team-mates who are playing softball to stay young are from sixty-five to seventy-five years old, but they do have some fifty-five and fifty-six-year-old players who are the stars of the game.  Most of the young ones are still working in their business.  They even have a player who is ninety!

Ed said that the main benefit of joining the league, in addition to the health benefits, is the advantage of spending time with friends every week.  He also gets to find out about new activities when members invite each other to activities that they might not have known about.

They are all playing softball on Tuesdays and Thursdays, and so they know where they are going to be on those two days.  Otherwise, they might not know what day it is!

Another way Ed Rocks his Retirement is by volunteering to spend time doing things for others, such as walking his wife's dogs, spending time with grandchildren, and generally helping people who are still working.   Ed can now do what he wants to do.

That's not all that Ed does.  He's considering becoming an Ombudsman for people who live in Senior Communities.   He also is trained in a type of dyslexia called Irlen syndrome, which is a reading problem (words swimming, words curling up, etc.,) that can be easily remedied by using colored transparencies.  He is considering helping others who have this syndrome, which is so easy to correct.

Listen to Ed's story on today's episode of Rock Your Retirement.