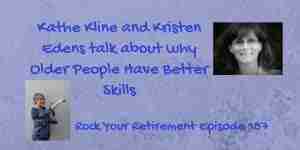 If you listened to the previous episode in this series, you’ll remember that retirement is a new idea. The first episode of the series discussed that. The second episode discussed that so many baby boomers aren’t really planning on retiring until they are physically unable to work. Then, the third episode talks about maybe we don’t ever want to retire. Today’s episode discussed why you might want to hire some of the people who don’t even want to retire and have better skills.

The article, How hiring the over-50s is the key to beating the skills crunch, talks about the shortage of people with better skills and hiring the older worker will help.

It's a WIN-WIN for Everybody

Basically, hiring older people is a win-win situation in the workplace. Because here are these experienced workers and big employers who are looking to fill positions with people who know how they can jump into the job and takeoff. These experienced workers have the wisdom and better skills to really take that job, that position and that company forward. This skills crunch isn’t just experienced in the US but all over the world. We have people that are willing to work but does not really match the skills that the business needs. Part of it also goes to age discrimination.

Ageism is Based on Old Mindsets

Those old mindsets are based on myths that somebody is going to retire, and as soon as that person retires a younger person will come and build it up. But the misconception is that the time to train, the time to get them up to speed will cost more. You have this person that’s seasoned and he/she has been there and is getting so much money. Part of the problem of the companies 10 years ago is that when they don’t have enough money anymore, they forced the older people out. They just hire younger ones because they are cheaper. Society, employers, and corporations are starting to realize that it wasn’t the best idea. They had this experienced pool of talent and now all they have are these younger people who are capable but just not there yet.
10 years ago layoffs, forced retirements and early retirements were highly encouraged. Now they are realizing that these persons have better skills and knowledge. So, what happens is they get to hire them back as consultants.

In the UK there’s a Government initiative called, Business in the Community Age at Work Leadership Team, which was started in September 2016. The initiative’s aim is that every UK employer should increase the number of workers aged 50-69 in the UK by 12% by 2022.

Kristen thinks the UK is leading the path with this because of number one, the skills crunch, and two, the talent pool. They are realizing that’s the hot age group that they want.

The article also talked about not only their skills but their ability to mentor their younger colleagues.

“They have often worked for multiple employers, in a range of environments and with a variety of management techniques so they have a valuable sense of perspective and resilience, Combining this with the fresh new skills, ambition and energy that younger colleagues are recruited for is a real recipe for success.”

We talked about multigenerational workplaces in episode 1. This is what the article talks about, bringing the generations together. They'll be able to have this synergy that you don’t get when you have a single generation workplace. The result is more productivity. Because you'll have different ideas, energies, and thoughts, and if you pull them all together, great things emerge. The UK is beginning to realize that.

Phil Jones comments: “After years in a highly-pressured role, sometimes over-50s are looking to maintain a good income in return for doing something they find less stressful, or more enjoyable, linked to personal purpose.

The ideal employment age is 25 to 45. People in these ages are either going to school, building a family, working full-time or part-time, and balancing their lives. They got a lot going on. On the other hand, people in their late 40s, 50s, and beyond, don’t have as much mental pressure and stress. So, it's nice to be able to relax and have a less stressful outlook on life in employment and yet still highly productive. Kristen thinks that we should hire more people after the ideal employment age because all those stresses in life are not as heavy anymore.

It Comes Down to Experience

My husband Les and I went to a local bar in our community and I noticed the waiter had no clue to do more than one thing at a time. He was very stressed out because he 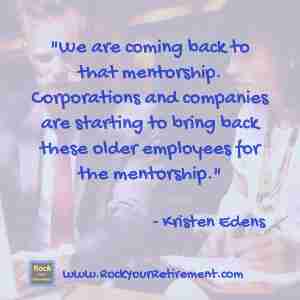 would deliver food and run back to the kitchen and then do it again. We were waiting for our order for about 15 minutes until I finally stopped him and said, “We’re ready”. But if he would have carried his order form on one pocket and a bottle of catsup on the other, he would have done far less running back and forth. An older person would have learned that already.

That is why it comes down to experience. You gotta get through those challenges. It doesn’t matter where we are in life, we’re going to experience that just as a part of the process. Eventually, that waiter is going to learn how to make his job more streamlined and easier.

That’s why there were apprentices because it’s a good way to learn. There are these senior employee hubs that are popping up where they have these seasoned or experienced workers who are ready to go out and help younger folks or businesses. We are coming back to that mentorship. Corporations and companies are starting to bring back these older employees for the mentorship.

For example, this show. It didn’t start out as a content plan, because I don’t talk about money or investments, or insurance really, but people wind up finding out that I sell Medicare insurance, and then when they need it, they reach out to me. So that is what Kristen does. I met Kristen Eden on Twitter. She has a lot of great ideas about retirement.

MedicareQuick.com/Checklist
How hiring the over-50s is the key to beating the skills crunch