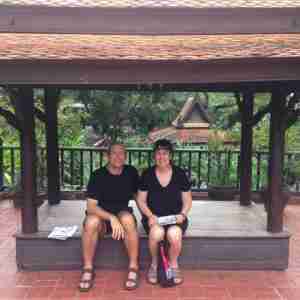 Doug Nordman is the author of ‘The Military Guide To Financial Independence And Retirement'.

Doug's writing has to do with Military Transitions.

If you think he's doing it for the money, you're wrong.  All of his writing revenue is donated to military charities. He's a retired submariner who's been living in Hawaii for over fourteen years. So if you hear the birds in the background, it’s because he is in a tropical area!  He and his wife, (who is a retired Navy Reservist), raised their daughter in the islands.    They enjoy slow travel all over the world (some of it on military Space A flights) and DIY home-improvement projects.  After retirement, he was “bit” by the surfing bug and learned to surf with his family.  Their daughter is now on Navy active duty with her spouse.

A few years after retirement, Doug stumbled into writing and became an author. His book provides service members, veterans, and their families information on military transitions into retirement or a new bridge career. Some advice Doug offers in our interview:

Being alone together in the same house

I asked Doug about spending so much time with his spouse now that they are both retired. He says he doesn't get tired of spending too much time together. It is important to have a plan before retirement and talk with our spouse about it. Doug and his wife still have alone time even when they are both home. Learn to adapt to renegotiating roles as things change in your lives. Doug also says it is ok to keep separate interests and priorities.

What advice would you give to a retiree who feels stuck?

You've already worked out the finances, and now you're “working” on your lifestyle.  Make the time to practice it before you permanently retire.  Take at least 2-3 weeks of vacation to fully unplug from your career. Give plenty of time for contemplation and thoughtful discussions with your family.  Don't take on huge projects during this time. Instead try to catch up on your sleep, enjoy some long walks, and build a list of activities that you'd like to try.

If you would like a copy of Doug's Book, The Miliary Guide to Financial Independence and Retirement, go to Amazon or Impact Publications (Which sells a 64-page “Pocket Guide”) You can also find it in the GSA catalog if you are on a military base or check your local public library or military base library

Get today's Freebie, 10 tools and tactics for your military transition at http://RockYourRetirement.com/MilitaryTransition

Links to the  people/organizations we mention in the interview

This post on Retirement Lifestyle first appeared on http://RockYourRetirement.com