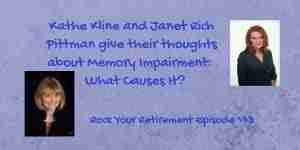 Memory loss may be a normal part of aging, but it may also be caused by dementia or treatable brain conditions. Getting the right diagnosis and care is important. This episode talks about WebMD's article on memory impairment.

Forgetfulness is a usual common thing and happens to most people, young or old, including memory champions. Distraction, stress, fatigue, depression, anxiety, absentmindedness, and many other factors may contribute. Luckily, most memory impairment problems are reversible. Temporary episodes of forgetfulness is not an indicator of Alzheimer’s or Dementia.

The article discusses 3 stages of memory:

Common memory impairment or brain blips include misplacing frequently used objects. Such as keys or glasses, forgetting why we walked into a room. And periodic difficulty remembering a word we want to say. It is frequently linked to situational factors and normal age-related changes. For most people, mental flexibility starts to become a bit less efficient with each passing decade from our late 20s onward. Memory starts to decline in our late 30s, so it is common to notice more memory problems as we age.

Sleep is when you consolidate your memories. It helps you get rid of your memories and consolidate them. We all think best when we're well rested. A clear, alert brain allows us to focus, learn and remember information, and to be creative. On the other hand, when we're sleepy, we make more mistakes and are less productive.

Healthy sleep puts us in the right state of mind to take in information as we go about the day. Not only that, we need a good night's sleep to process and retain that information over the long term. Sleep actually triggers changes in the brain that solidify memories. It strengthens connections between brain cells and transferring information from one brain region to another.

Other Causes of Memory Impairment

Other causes of memory impairment are stress, anxiety, ADHD, depression, metabolic diseases, alcoholism, vitamin B12 deficiency, infection, and drugs. Episode 101 with Dr. Camille Newton talks about many of the drugs that may cause dementia.

Most people don't realize that it's not just only alcoholism but heavy consumption of alcohol. That is one cause of memory impairment. If you have 2 or 3 glasses a night, you might not get tipsy or inebriated but you have all that sugar. All that alcohol in your brain, every night your brain has to fight and get rid of it. Then your brain just gets tired because of this. It has a hard time purging all that alcohol and sugar.

Control the Way We Progress and Become Better and Healthier

Before you put in those sweets or steaks, here is some food for thought. Research suggests that what we eat 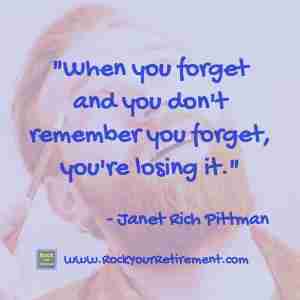 might have an impact on our ability to remember and our likelihood of developing dementia as we age.

You just have got to be in a position to put your foot down. Tell yourself that I am gonna beat this, I can reverse this, I've got to get a handle of this. That's when you go out and get help. You go out and have other people that have beat it and knows what's going on. Not some doctor who's gonna give you a prescription and wants you to come back in six months.

Our guest host is ­­­­­­­­­­­­­­an expert on memory. She was on the show before, and you can hear more about her credentials on episode 146. Janet Rich Pittman is on a mission to help people fight the effects of aging by powering up their brains. As a Licensed Dementia Administrator and Certified Dementia Practitioner, she has seen firsthand what dementia can do to its victims and their families—and her years of research have taught her that it’s possible to prevent dementia, even REVERSE IT and reclaim your brain.

The article mentioned in this Episode:

WebMB: Is Your Memory Normal?