Making that Move to Ecuador – Episode 213 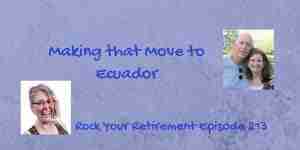 This is the last episode of our series on living overseas. In the first episode, we talked about the possibility of living overseas. The second episode talks about the things to do before moving abroad. In last week’s episode, we discuss where to retire. Many of us want a place not only where we can afford to live but also where we have like-minded people that we can be friends with. Also, we discussed why my guests chose to move to their particular country, Ecuador.

Today, we’re going to talk about Ecuador in addition to talking about bank safety. Many articles recently, in October 2019, discussed Americans losing money in Mexican banks. It seems to have been a scam, but we’ll talk about it and what you can do to protect yourself.

Deciding Factor on that Move


When you talk about living somewhere, Cynthia Staton suggests that you have to consider many factors. On top of their list was the cost of living. They also wanted a warm temperate climate, healthcare, and a sizable city.

Why Did They move to Cuenca, Ecuador?

Edd and Cynthia never really heard of Cuenca, Ecuador. They said that they didn’t find it but rather it found them. Because of the wishlist that they made, they were focused on Latin America. Edd was keen on Buenos Aires but it has seasons, and they didn’t want that. Also, as we’ve discussed in the last episode, political volatility. Buenos Aires is not as politically volatile as it is financially volatile.

If you’re a retiree, you may be living on a fixed income. You need to know how much you have available to spend every month and how much it’s going to cost you to buy groceries. That’s an important factor to point out when you’re looking for a place to retire abroad. You want a stable economy.

You certainly want to create your community of friends wherever you go. However, the truth is that proximity doesn’t necessarily have to describe a friendship. You can be friends with people even if you don't live in the same place.
Although they are already living overseas, Edd and Cynthia still get in touch with their friends in the US, thanks to technology. It provides them with easy access to communicate with their friends. The reality of life is that if you have close friends that are more than you can count off on one hand, you are truly blessed. A lot of friendships, they’re just friendships but they are not like that deep friendship sort of thing.

Edd and Cynthia recommend that you seek out friendships with locals. They can help you so much particularly in terms of recommending medical people in your life, attorneys, and even understanding the culture. Also, if you’re not fluent in the language of the country that you moved to, there are plenty of bilingual locals that you can befriend. 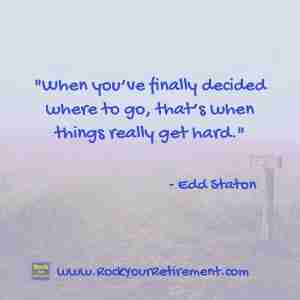 In a foreign situation, Edd and Cynthia noticed that when you’re packing your luggage and getting to move to a foreign country, some people seem to leave their common sense at home. They just do things with their money when they move abroad that they would never do in their previous life. It seems that when you move abroad, you really want to work so much and want to be part of the community.

To qualify for a residency visa, Edd and Cynthia have friends that invested in a condominium coming out of the ground. When their residency application is up, they couldn’t get their deed because of various shenanigans. So, they ended up having to pull 25 grand out of their savings to invest in a CD, which was another way to qualify for a visa. They eventually got the deed but things like that can just happen.

How Much is the US Dollar Worth in Ecuador?

Edd and Cynthia maintain US bank accounts and they use the US dollar in Ecuador. It's a little more security for people on a fixed income because you're not constantly converting your money and so you're not subject to the fluctuations. It also gives you a little more sense of the worth of what your assets are. The US dollar also tends to be stable.

When you’ve finally decided where to go, that’s when things get hard because you’re going to unravel your whole life and transplant yourself into a whole different situation and it’s so easy to make mistakes that you don’t want to be trying to fix long distances. Cover every single thing that you need to think about to make sure you have a successful experience.

If you’re approaching retirement and are concerned about your financial situation be at that you know you don’t have enough money or you’re afraid that you’re going to outlive your money, retiring abroad is an option that’s well worth considering and whatever fear factors you have about that idea, just do some research and make a good decision.