Living Overseas: Is It Possible? – Episode 210 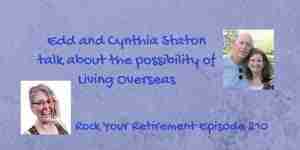 Today we have 2 co-hosts in this first series of living overseas. If you've considered living overseas, or if you know someone who is considering it, this is the episode for you!. In today’s show, we talk about why you might want to live overseas. If you have lost money in the stock market, or the value of your home has declined, you may not feel like you can ever afford to retire. You might be worried about retiring because you haven’t saved enough money, or you just want a slower lifestyle. Perhaps you have a friend who is in a tight situation and you are looking to help them with suggestions on their retirement? Or maybe you are just curious as to what it is like to live abroad. If any of these situations are yours then stick around for all four episodes.

The whole idea of creating a wishlist is because so many people probably have probably never asked themselves this question in their whole life. It isn't to instill some kind of race against time or create disinclination towards death. It's a reminder of all the things we want to achieve in our time here, instead of wasting our time in pointless activities, we are directing it fully toward what matters to us. There are some basic things that you need to keep in mind, for a lot of people the lower cost of living is going to be a drive, but there are some that want to do it just for the adventure.

Living Overseas Away From Your Family

When Edd and Cynthia made this decision to move to Ecuador, they didn’t have grandchildren yet, but they allotted budget for traveling so that they would be able to go back once the children were born.

There’s a misconception that living overseas is so far and expensive from the United States. They spoke with someone who said that a trip from Houston to New Jersey was more expensive from their trip from Ecuador to New Jersey. There’s just a mindset that living this lifestyle is so “out there”, when is the reality is, that it's not really unusual, weird, or isolating as people may think.

Healthcare is a huge concern for people no matter where they live as they get older. Here’s a shocker for everyone, healthcare outside the United States is super 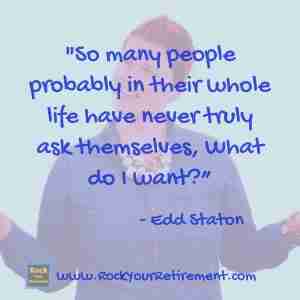 affordable. It’s comparable, if not in a number of cases, better than the US.

Many people that live in the US have misconceptions if they haven’t travel very much that the rest of the world with the exception of a few places, is considered third world countries. The reality is much of Ecuador is rural but Cuenca being the third-largest city, is a city like many other cities in the US. That was on Edd and Cynthia Staton’s wishlist to live in a place that has culture, access to excellent healthcare, all of those things you would expect in a larger city.

Learning the Language When Living Overseas

The idea was Edd and Cynthia were going to learn Spanish before living overseas. They arrived in Ecuador knowing little Spanish with the fear that they were going to perish but it turned out that Ecuadorians like playing charades and hangman. If you choose to become fluent in another language, that’s a choice, but being functional is more than enough. You just do your best with what you’ve got as Edd Staton would say.

When living overseas, it’s important that you find and recreate your sense of community. Whatever that means to you because you’re going to want to know and meet people. Whether they are native English speakers or bilingual locals, it does not really matter. You want to find that commonality. That is why it’s important to think about living in a place that has somewhat of an established expat community. You’re going to feel more comfortable, not just with the language but with everything that comes with it.

Edd and Cynthia Staton are creators of Retirement Reimagined!, a revolutionary Master Course for Baby Boomers facing an uncertain future. Recognized as experts on expat living, they have appeared on network television and written hundreds of articles for international magazines and other media outlets. Each volume of their trilogy of books, Mission: Rescue Your Retirement is an Amazon Best Seller. The collection hit #1 in 10 categories as diverse as comedy, personal finance, retirement planning, self-help, and travel. Visit them at www.eddandcynthia.com

MedicareQuick.com/Checklist
Five things you must do before you pack your bags for an overseas retirement