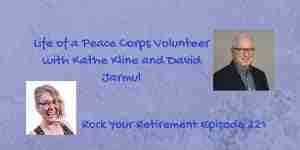 Today, I will be sharing with you some insights from my interview with David Jarmul, the author of “Not Exactly Retired”. His book discusses the trips he took within the United States and with the Peace Corps. But today we will focus on his Peace Corps tour. You will also get to know if you're too old for the Peace Corps and what to expect if you sign up.

It's Not Too Old to Start

David Jarmul started his Peace Corps trip at 63. He went to Nepal with his wife a few weeks after he left his job and spent two months even in areas where westerners rarely go. They went off a few months later to serve for over two years in Eastern Europe in a little country called Moldova.

While they were here, they were able to apply for Medicare at the American Embassy in Athens, Greece. The Peace Corps has an administrative director in the country where they were serving it. They guided him and his wife through applying for Medicare before they were about to turn 65. He mentioned that nobody joins the Peace Corps to get rich. It shouldn't be the reason to join it. But from a financial standpoint, this is a good way to make a transition from paycheck to the next phase of retirement since the Peace Corps covers all your expenses. They pay your way over as you get free medical and dental care.

Peace Corps is a Good Way to Make that Transition

Peace Corps has its own doctor and a medical team that is really excellent. They were able to receive good medical care. This covered them until shortly after they finished their service and was able to transition over to activating Medicare. He mentioned that this is a real nice benefit but not the reason to do it, but it turned out to be a good way to make that transition.

It's Been Always David Jarmul's Dream to Join the Peace Corps

Probably you are all wondering why David Jarmul and his wife joined the Peace Corps. David had a high-powered job at a university. According to him, it was pretty stressful, but he loved his job and colleagues. It has always been their dream to join Peace Corps and as they hit their 60s; They made this dream come true. Since traveling has always been their passion, they went on a trip within US and then Nepal. He said he wanted to move on to the next chapter of his life and so they had a series of adventures, which he feels the best thing they ever did.

They felt fortunate enough living in United States, but wanted to go some place where they could be useful. He became the librarian while his wife an English teacher. Here they felt really useful, and they made dear friends. They learned a lot and ended up feeling the way most Peace Corps volunteers do when they finish, which is getting much more than they give.

David Jarmul and his wife Champa were able to make friends from all over United States through volunteering in the Peace Corps.  According to him, it was a joy, and it's one of the great things about it. Some of their friends even consider this experience as a way of making the most out of their lives. They never regret the 2 years they spent volunteering in the Peace Corps as their family are very supportive of them because they knew that this was in their hearts, something they have always wanted to do.

It was during one of their trips in the United States when they were able to meet their old friend Linda. It was she who opened up everything about Medicare and Social Security that are good to have. That they need not to wake up at 85 and say that they should have done this. It's like whatever you want to do, think constantly about it and try to make it happen. So everyone's have to find what it is they want. For David and his wife, their theme is to go for it and embrace the next phase of their lives.

How the Peace Corps Started

Former president John F. Kennedy established Peace Corps in 1961. It is a non-political, non-religious organization, which has gained bipartisan support from Democrats and 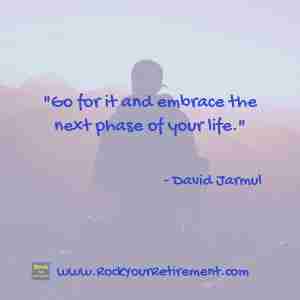 Republicans. Here, volunteers could learn as much as they could about the country they went to. They try to live their culture, and share theirs too, and try promoting world peace. It sounds trite, but it's actually what every volunteer is doing all around the world. It's ordinary people in other parts of the world forming bonds with each other as human beings, and for David, this is the wonderful thing.

They were able to introduce new things to the people especially for the students such as robotics and coding and have designed the libraries. They have joined some competitions and gained awards for these. For them, these are really gratifying to know that your hard work is paying off, but most importantly that they have embraced it and made it their own. But their main goal is to empower people in the community, share their skills, and help train them to try new things and continue, which give them a good feeling when this happens.

David Jarmul was the head of news and communications at Duke University for many years before walking away to pursue a new life of service and adventure with his wife, Champa.

His book, Not Exactly Retired, is receiving rave reviews and tells the inspiring story of a couple who steered off the main highway of the American Dream to reinvent themselves. The world was calling, and so were their hearts. They left their home to wander around the United States and Nepal and then serve as Peace Corps volunteers in Moldova, in Eastern Europe.

Not Exactly Retired is a book for anyone seeks inspiration about how they, too, might pursue adventure, serve others, and embrace the next phase of their lives.

Not Exactly Retired: A Life-Changing Journey on the Road and in the Peace Corps
RockYouRetirement.com/VPN