Jim Sweeney is our guest for today's podcast and he will talk about his successful company and what he is doing now. You can listen to the show at http://rockyourretirement.libsyn.com/jim-sweeney-mike-rafone-episode-28 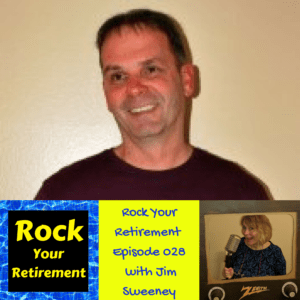 Jim Sweeney sold his successful company, Sweeney Sales, in May 2005. So what is he doing now?  He has created his Trademarked MIKE cartoon sports character to become the first universal animated brand in sports.

The 58-year-old Sweeney still participates in sports (slowly!) as a masters athlete and serves as Head of USA for FIMBA – the governing body for masters basketball tournaments around the world.

Jim Sweeney was a 1980 recipient of the Frances Pomeroy Naismith Award as the United States' top collegiate basketball player under 6'0″ tall. He was the captain of the Boston College Eagles. He was nominated by Boston College as a Rhodes Scholar candidate. Raised in Trenton, New Jersey, he attended the Lawrenceville School before receiving an athletic scholarship to Boston College.

Following his 1980 graduation from BC, Jim Sweeney played basketball briefly in Sweden. He returned to the States, got married to his sweetheart, and spent the following years as a manufacturer's rep in the computer industry. While still in his forties, Sweeney and his wife Maura closed their computer firm to launch New Vision Entertainment, a Florida-based LLC focused on the development and promotion of entertainment properties that positively impact culture.

Jim wanted to do something totally different from a creative nature that would be fun and exciting and had the potential to positively impact others.  He created an animated cartoon character named Mike Rafone..

Yes, this is the same Jim Sweeney that was involved in a scandal about 35 years ago. He tells us how he got through that scandal (it still comes up even today) and how with the help of his friends, his family, and his faith, the scandal made him a better man. He had testified as a witness in the 1978–79 Boston College basketball point shaving scandal in which members of organized crime schemed to control the outcomes of several games. Jim was neither charged nor offered immunity in exchange for his testimony.

Jim says that everyone makes mistakes. The best way to get through something is to move forward and not dwell on the past.  Good advice, Jim.

At age 58, Jim still wakes up with the sun.  He plays basketball several times a week and travels to other countries to play in masters level tournaments.

Jim inspires and motivates others and lets them know that they, too, can do something totally outside-the-box.

What should retirees know before they retire?   Retirement is an exciting new chapter in life. Life doesn’t stop. Seize the opportunity that retirement and all your new-found time present.

How can retirees get “unstuck”, or motivated?   Follow after your passion. Don’t hesitate, don’t fear and certainly do not worry about what others are saying or thinking.