How Retirement was Brought Up – Episode 184 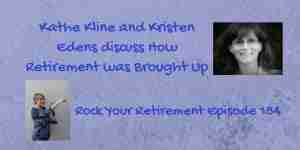 Social Security Then and Now

When they brought up Social Security, life expectancy for men was 58 and it was 62 for women. What they did is they made the Social Security retirement age at 65. If social security now was similar in concept to social security then, you wouldn’t even start receiving it til’ you’re 85. As what our co-host Kristen Edens said, we already know what’s happening with them, because they are considering to increase it to 70, 71 or 72. A lot of people are realizing that they can’t rely on those services, those things that our parents and grandparents relied on. That is why, in the last few years, there’s been this massive shift of, “I’m gonna take care of myself.” Not really fully relying on 401ks, pensions or Social Security. Today's episode will have some insights on Mike Drak's article about, Where did the idea of Retirement come from?

Why Retirement is Being Brought Up?

The Social Security, pensions, and your own savings used to be the 3-legged stool for you. But nowadays nobody has a pension anymore unless you work for the government. People lost a bunch of money in their 401k plans. Things like these aren't being brought up that much. What they did when they lose all that money is they move it all to cash and then they lock it on all those loses.

People won’t hire people that are older. You’re kind of forced out when you hit a certain age. So many people tell me that after they hit the age of 50, they can’t get a job and you don’t get your social security til’ you’re 65. So, what do you do? Why will the idea of retirement be brought up in the first place?

The last 10 years have proven to be very fascinating because of the change of mindset in society, employers, and corporations. 10 years ago, layoffs, early retirements, forced retirements were just rampant. Anybody over 50, they were out with just a small early retirement bonus, which is not enough. But, as we all know there was this massive concern on unemployment, what’s going on and what are we going to do? What people did was, they found side gigs, do freelance, entrepreneurship and find jobs that would accommodate them.
Now, employers are realizing that there’s a lot of wisdom, experience, and knowledge that these older people can bring us. That is why we're brought up into it again.

We are at the point that we need the tech knowledge, the digital nativeness which is very popular with the younger generations but we also need the wisdom, the experience and the dedication of the older generations. Also, employees who know how to deal with people face to face.

I love the idea of multigenerational workplaces. It’s just not in our world but also in the world for assisted living where they are trying to bring the old and the young together. This has brought up much help for people learn something from different generations under one working environment. They’ve done some studies where it helps both all of the generations where you have different ideas and them coming together and just communicating.

Disadvantages of Working Longer or Not Retiring

If you’re not passionate about your work or if you’re working in a job that is physically demanding or stressful, the idea of continuing work is not very pleasant. Also, if you are

working in a physical job (eg., construction worker, waitress), it might not be possible. Older workers can also make it more difficult for the young to get their foot in the door when they are not retiring.

For example, this show. It didn’t start out as a content plan, because I don’t talk about money or investments, or insurance really, but people wind up finding out that I sell Medicare insurance, and then when they need it, they reach out to me. So that is what Kristen does. I met Kristen Eden on Twitter. She has a lot of great ideas on retirement.

Mike Drak's: Where did the idea of Retirement come from?
MedicareQuick.com/Checklist
Social Security History
Episode 109 – What Does Your Retirement Life Look Like?