How Multi-Generational Living Will Work Ep 237 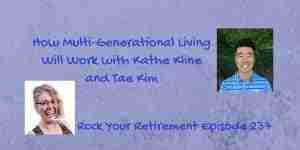 Multi-generational living means a single household that includes family members of several generations, grandparents, parents, and children, all under one roof. Was once a cultural phenomenon has slowly become a national trend. For some families, it’s about caring for aging parents, others have adult children returning home. Also, for some, it’s a cultural expectation. And others have adult children that haven’t left.

Learn to Deal with Conflict

It's tough from the spouse’s point of view. For Tae’s part, you can't be as a direct daughter-in-law it's hard for his wife to talk to her father-in-law like, “Hey you two you need to clean this up.” Time’s a little bit different. All of us have to contribute to a multi-generational household. To avoid any kind of conflict down the line, Tae would rather do the work upfront.

Tae’s wife is not living with her parents, she's living with his parents. So, it's very important to recognize, appreciate, listen to her concerns about a multigenerational household, without being judgmental but just kind of hear her out.

Tae’s family shares a community fridge. Everyone shops at their own timeline and then everybody was just kind of stuff their own things in different sections of the refrigerator. There was this time when Tae’s wife was going to cook and couldn’t find the carrots that they just bought. This is one of those items where you know it keeps coming up. So what they did to fix this problem was they labeled parts of the refrigerator saying, okay this my section, this is the grandma section. We don't go into each other’s sections and everyone's got their own section.

We have come up with the system of separating parts of the refrigerator and then just reinforce it on a regular basis.

Even Though You're In a Multi-Generational Living, You Still Need to Prioritize Privacy


It is recognizing that everyone has their own personal space in the house, and one of the things that helped out was having separate spaces within the house. Tae’s family has their own little community area where they can have their television and just sit on their couch. They lay out the things that they want, not getting into each other’s space as regards to like who left the newspaper here or who left tissues here. It’s a place where we can create our own mess, they can create their own mess, and we're not getting into each other’s space. That was very important for them.

In a Multi-Generational Living, Going with the Flow

Conflicts are going to happen on a weekly basis just because when you have four adults living in the house. It's natural for Tae and his wife to just recognizing where his 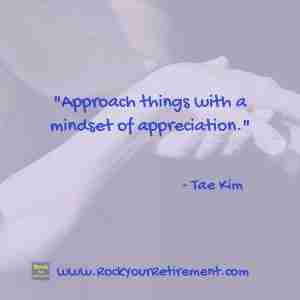 parents are coming from. That helps get things into the right mindset. You need to approach things with a mindset of appreciation instead of trying to say, okay, like this is not working for us. At the same time recognizing that, hey, there's a cost to everything.

For us we make a conscious decision to cohabitate because there is a mutual benefit from both financially at the same time from a family perspective. It’s comforting to have parents around. So, recognizing that we've made a conscious decision to be where we can't get everything that we want, but in the end, the benefit outweighs the cost and they're the things that we have to work through. Coming back to the right mindset try to look at everything from a very empathetic perspective.

Multigenerational households only work with a high degree of mutual respect, communication, and, above all, loving family ties.

Tae is the blogger behind Financial Tortoise. He writes about navigating the intersection between personal finance and being a sandwich generation. Tae and his wife cohabitate with his aging parents while raising their own children and building their careers.