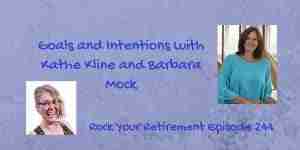 Get On the Right Track

Setting goals isn't enough. Though it helps us to create a plan, see the future, and stay on track to get things done, there's still a downside to goal setting. Setting and living your intentions allows you to focus on who you are in the moment, recognize and live your values, and raise your emotional energy, which in turn, raises your physical energy. Join us today in

As of this recording, she's still waiting for her retirement date, which is coming up at the end of March 2021. If you're listening to this in the future, start with our first episode of following her journey, and come along with us in sequence so that it'll make more sense. This first episode was titled, Barbara's Amazing Retirement Journey: Section 1. Today. Barbara and I will talk about intentions.

Evaluate Your Goals and Intentions

Barbara really wants to forget the year that was passed except for a few highlights. Just looking forward and in the past, that was a time for them to look at their finances. Throughout Barbara's marriage, they would take the time between Christmas and New Year's to go through in whatever form they had with their bills, their expenses, and would evaluate their goals.  They would figure out what are they going to pay off because their goal was to be debt-free by this time.

So they've been having a lot of conversations about what a weird feeling it is right now that they have done that on the eve of retirement. They don't have any debt. And they've minimized their expenses as much as possible. Now they're at the other side. Both of them have been kind of struggling because their pattern was the goal to pay off.

Now, this shift that they haven't made very well is what's their goal to spend or stay neutral. They want to go places and do things. It has been pouring down rain everyday storm after storm landslides flooding, and it's bleak. There's been a lot to talk about, where will they be at this time next year? Where will they be in October? Because both of them know whether it's a week or a month or two months in the fall, and then probably come home for Christmas, because they didn't get a Christmas this year. But then right after Christmas head somewhere, and that is the discussion.

They don't feel like they have to make a decision right now. But because they're a bit bored and can't go outside. They've been spending a lot of time. Barbara and her husband were always the people that are always saving for the future. And now, they're those people that can spend some money and go have some fun. It's a very weird thing and it's a big adjustment.

Retirement is Going to be a BIG Adjustment

Barbara's husband is constantly saying with you retiring, and not working anymore, not putting money in a 401k not investing. That's going to be a big adjustment 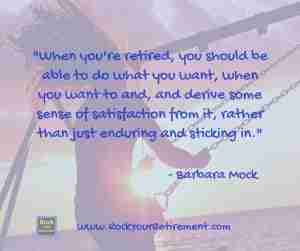 for both of us. And it's just a big adjustment in the way you think. So she'd be interesting to know, what have other people done? What have other people decided? We could go buy a new truck? Do we need one? We could buy a travel trailer? What size? Is it better to get a motorhome? Do you invest in something that big when you're not really sure that you're going to enjoy that? Or do you do vacation rental by owner? Or do you do trusted house sitters?

It's just this whole world is available to them. And yet, they still have a mindset of, they need to save for retirement. Now it's here. It's very, very interesting discussions they're having these days.

Barbara has tried to do new year's resolutions in the past. It works about till February. And if it's not a habit, within four weeks, it's not going to happen. So she made a list of the kind of her top 10. Printed them up, and stuck them on her bathroom mirror, It's not necessarily a resolution, but they're just reminders that she looks upon, and they're short. But the first one is to be open to new possibilities.

Barbara has been doing the same department, not the same job. But she has been in the same place for 44 years. And it's just time to be open to kind of what's new. She's just kind of keeping an open hand and an open heart about what her life could be this year and just trying some new things.

Find What Sets You Up

For those of us that are entering retirement, don't be in too big of a hurry to jump into a lot of things. But the things you do jump into make sure they're fulfilling and worthwhile and what you want. Because unlike a job where you need a paycheck, and maybe you stick in a lot longer than you normally would, because leaving a job and coming and going has its consequences. When you're retired, you should be able to do what you want, when you want to and, and derive some sense of satisfaction from it, rather than just enduring and sticking in.