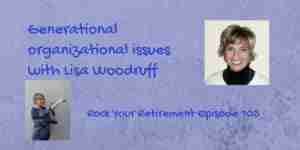 Lisa is a professional organizer, productivity specialist, and author. She believes organization is not a skill you are born with. It is a skill that is developed over time and changes with each season of life. I am an avid listener and big fan of her podcast show at Organize365.com.

I gave Lisa an update on my personal progress and yes, I am making progress! We also talked about my ” Sunday Basket” and if you listen to Episode 88 which was my first interview with Lisa you can learn more about that.

What are the different Generation Groups? The dates can vary depending on where you look but here is a general idea:

Lisa and I discuss how each generation deals with their “stuff” and what the differences are.

The Silent Generation was born and raised in the Great Depression. They had a lot available to them educationally but not a lot available to them materially. The Silent Generation typically did not have mortgages on their home and did not use credit cards. They were a hard-working and fairly frugal generation. There was not a lot of consumerism while they were growing up.

Baby Boomers were born and raised in the affluence of World War II. This is when consumerism and a lot of toys really came on the market. Barbies, GI Joe, TV’s  and commercials became prevalent and advertisers started targeting teenagers.

Gen Xer’s had all of the toys. They had all of the toys the baby boomers had growing up and then some. The majority of Gen Xers grew up in the 80’s which was the height of materialism. In the 80’s is when things cost the most and people wanted to accumulate a lot of “stuff”.

These items that are in our parents and grandparents homes and attics are things that were hard earned. Baby boomers sometimes have a difficult time getting rid of their things because they worked so hard to obtain them. Take the time to go through those things with your parents or grandparents. Let them tell the stories of how the stuff was obtained and the memories that come with them. Find ways of making memories using the stuff.

Lisa has a lot going on! Below is some information on her workshops, podcast, and books

Paper organizing workshop called the Sunday basket. You can learn more about it at thesundaybasket.com

You can also learn more or listen to her podcast at organize365.com

The Mindset of Organization: Take Back Your House One Phase at a Time

How ADHD Affects Home Organization: Understanding the Role of the 8 Key Executive Functions of the Mind