Deal with Pain through Hugs and Laughter #003

Dealing with pain is one of the toughest thing to do. But did you know that you can make it easier to deal with pain through hugs and laughter? You can listen to the show at http://rockyourretirement.libsyn.com/deal-with-pain-through-hugs-and-laughter-episode-003 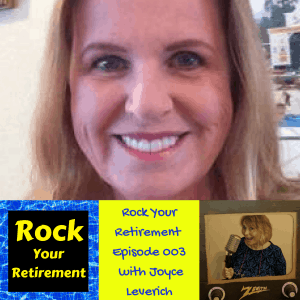 Joyce Leverich was working as a Legal Secretary for the corporate department of a large law firm.  Her friends were met at work.  Gradually she found that her back problems caused her to retire in her early 60s.   The pain was so great that she found it difficult to do anything.  Because of the pain she became depressed and wasn't sure what she was going to do to get out of her slump.  Not only that, but all of her friends were working, and she was home alone.  She went through a pain management clinic who taught her how to cope with the pain and how “getting out” is the most important thing to deal with depression.  She still deals with chronic pain, but she learned how to deal with pain through hugs and laughter.

Socializing is a great way, according to Joyce, to deal with depression.

After she moved to San Diego with her husband, she searched the Internet for social groups.  She found some couples groups, but also found a group that was specifically for women.  An opportunity arose that allowed her to take over that Meetup group that was floundering.  After taking over the group, she decided that she would have activities, and if even ONE other woman decided to join her in an event, she would get together and spend time with that woman.

The group started off slow, and the first woman she met for coffee never came back.  Joyce was afraid that the group would end because of that, but she didn't despair.  She kept posting events, and the group flourished.

She took that group and turned it into a massively successful, and very active woman's group that meets weekly.  Not everyone attends weekly, but all the members are active in the group.

And they all deal with pain through hugs and laughter.

Some of the pain is physical, and some of it is emotional.  Really, the group is about having friends and having fun!

The group volunteers, has line danced, gone bowling, and do all kinds of things.  There are 20 or 30 women who help post activities.   A lot of women in the group deal with pain through using hugs and laughter.

Learn how she grew the group in today's episode of Rock Your Retirement.

This article on Retirement Lifestyle first appeared on http://RockYourRetirement.com. ©2016-2017Deal with Pain through Hugs and Laughter