Creating An Adventure in Retirement: Ep 200 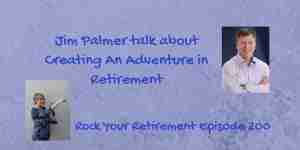 This episode is from the vault and was first released March 26, 2018.

Have you thought about creating your own Adventure in Retirement?

This podcast episode falls under the 2nd pillar, Significant Other (Be adventurous with your spouse), in the Six Pillars of Retirement. Jim Palmer is a marketing and business building expert and in-demand coach. He is the founder of the Dream Biz Academy and Dream Business Coaching and Mastermind Program. Jim is the host of Newsletter Guru TV, the hit weekly Web TV show watched by thousands of entrepreneurs and small business owners and he is also the host Stick Like Glue Radio, a weekly podcast based on Jim’s unique brand of smart marketing and business building strategies.

Jim started thinking about and living his retirement lifestyle before retirement age. Instead of waiting for his retirement, he is living out a dream now while he continues to work. He and his wife sold their house and put the contents in storage. They are currently living on their boat, which they named Floating Home and traveling up and down the east coast. They are enjoying a more simple life.  He has created a dream business where he works with clients only 3 days a week and travels the rest of the time. He hopes to continue working for many years, beyond typical retirement age and says it will be possible because he hasn’t worn himself out with a work that is unfulfilling.

It's time for a big adventure in retirement!

It was Jim's wife's idea to live on a boat, but it's Jim who is the “boat guy” as he grew up on boats.

When Jim married his wife, they wanted to have their own boat. However, between work, raising four children, and maintaining a home, they never had the chance to buy one. Once their children got married and moved on, and Jim's wife Stephanie said she is done with her job, suddenly they were no longer “landlocked.” They spent a few years trying to decide what they would do and where they would live, They did get a small boat which was big enough to sleep on but not that big. Eventually, his wife suggested they live on a boat. Jim's initial thought was, “We will need a bigger boat.”

Then their adventure in retirement began. They sold their house, found a bigger boat, and moved on April 15th, 2017. They initially agreed to an an18-month plan. First, they went to New England to see their daughter and grandkids. Then they went to Chesapeake Bay, which is their home port, and they will go to Florida for their first winter.

So, at the time of this interview, they were almost a year into their adventure in retirement. How is it?

They love it so much! Jim feels living on a boat is like an everyday vacation. It's very relaxing, and it is just a simple life. They are now talking about a 5-year plan to continue their retirement adventure on their boat. I know very little about boats and tend to think of it as somewhat similar to living in an RV. Jim and Stephanie's boat is 50 feet long and 14.5ft wide. It has 2 bedrooms and 2 bathrooms. It's a motor yacht with almost 1000 horsepower. Jim said they don't want to go on a camping in the waters, they want to feel comfortable. They wanted to have a separate space if they needed it so it isn't too cramped.

We talked about all the amenities in Jim's boat and the maintenance and repair that goes along with it. It is quite fascinating! An interesting fact is that you don't have to have your captain's license. The fact that you own a boat and can drive it means you are a captain. Both he and his wife have taken courses through the Coast Guard. Jim's job is to drive the boat and do maintenance on the boat. His wife's job primarily is the navigator. She took a multi-day class through the Annapolis School of Seamanship on how to plot your course. Jim says you never stop learning because things that happen out at sea happen quickly and unexpectedly. Fortunately, they have had none major disasters on their boat, but Jim talks about some scary moments.

What has been the best moments so far?

What has been the worst moment so far?

Jim tells us a story about how one engine went down near Atlantic City. The boat is rocking really hard, which made Jim nauseous and sick. Yet, he still had to go to the front of his boat, catch a line from the Sea Tow boat and attach it to his boat so they could tow them.

“We are very removed from all the noise that used to be part of our lives.”

Jim says he has discovered through their journeys and meeting others who boat, that there is hope for humanity. When they removed themselves from the big city and visited 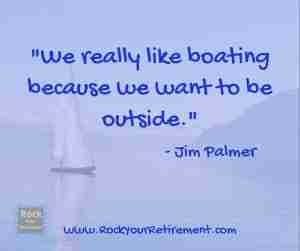 “Small Town America,” they met some of the friendliest people. They take care of each other and look out for each other, and people are very friendly and want to talk to you. He said it has a sort of restored their faith in humanity. They also really do not watch TV and they don't miss it at all. They watch the sunrise in the morning and sunset in the evening, that is their reality television.

We also talked about how they learned to live on a boat, how would someone get started if they were interested and how to buy a boat?. For me, I would have no clue where to even begin or how to live on a boat. He said they read a lot of books from people who have done it. Jim has also written 7 books we based him and his a little on their boating adventure in retirement.

Sometimes when you are getting ready to do something big, your mind starts playing the “what if game” which can paralyze you with fear.  If you are thinking about something you can think about all the things that can go wrong, but what if you have the adventure of a lifetime?

Do you have a story on how you created your own adventure in retirement? We would love to hear it! Post in the comments below.

If you want to check out Jim's Blog on their adventure in retirement, go to http://ourfloatinghome.com/

Websites Mentioned in the interview: