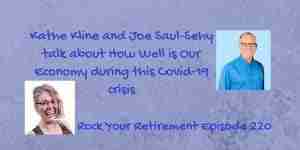 I know that we don't normally talk about money on the Rock Your Retirement Show, but in today's falling stock market due to the Covid-19 outbreak, you probably have questions.

Joe from The Stacking Benjamins Show was kind enough to come on the show to tell us what we should be doing right now.

What’s very frightening is that some people you see talking online and not the health stuff, but just in money forums. Those people said, Oh, this goes into a depression. Do you keep investing? Is everybody okay? I just want to sell everything. That's awful and nearly as awful we could maybe talk about this too is when do I quote back the truck up and start buying everything? All those for different reasons are scary places to be.

I can understand those feelings. Because I've lost a lot in the stock market since this pandemic has been going on.

We’re Still Not in a Depression

You saw the tremors around the start of March a little bit. The last few weeks have been nothing short of depressing. And It has been depressing, but we're not in a depression.

We won't know that for a while. Because just to get to recession territory, we have to have two quarters in a row of certain levels of negative GDP. And so we won't even know if we hit a recession till we get to the six-month mark. So I think people worried about depression are a little premature. Jumping the gun a bit.

The Economy Has to Continue

Don't make decisions when you're emotional. Work from an investment policy statement that you created when you were not emotional and go back to that guide today and go No, no, this is what I said I was going to do and just keep following that.

What Joe Wouldn't Do Right Now

Somebody was talking to Joe on Twitter about buying Delta Airlines. Their point was obviously airline stocks are super low. And they said the government's not going to let them go under because it's an essential service. Even we had the president on recently talking about the fact that airlines and cruise lines are things that we want to make sure do well.

Going back to just not that long ago, history 2007-2008. Joe remembers them talking about Delphi won't go under, General Motors won't go under. All those companies declare bankruptcy. Also, the Lehman Brothers. Before the biggest analysts that follows them said, they're too big to fail. The government will not let Lehman Brothers go bankrupt. The person who ostensibly knew the most that weren’t in the company, and they still went. That is why you should not bet on Delta Airlines right now. And that's not negative to Delta Airlines.

They Are Worrying Too Much About the Economy

They're worried about the economy. So they want to let people go out, but what's going to happen is more people are going to get sick and then the economy will be shut down longer..

Take your medicine, get rid of it. It's like we tell people when they have credit card debt when they come to see people like you or I. Let's take care of this problem now, I know you want to do the sexy stuff, like, get into investing, talk and whatever. But you know we're going to do, we're going to cut up the credit cards. We're going to learn how to do an all-cash lifestyle. We're going to get an emergency fund, and people like Wow, that sounds boring. It is, but let's get rid of this part. So we can do the fun stuff, but do it for a long period of time.

We Can Get Through this By Doing Nothing

We've had a crisis before, we've always come through it over and over again. The math says, stick with what you were doing. Don't make any drastic changes. But the problem is, we as people are very emotional. For some reason can't, we don't want to do it. We don't want to believe in math.

Joe said there's a reason for that, though. With regard to finances, it's better fixed by doing nothing. We are doers as people, right? I got to put a bandaid on it; I got to do this thing; I got to fix this thing. I got to make this better. We apply effort, and things get better. The second law of thermodynamics is things tend to fall apart. Everything is trying to fall apart. Finance, If it's good to begin with, and we leave it alone, we're going to do better.

Fidelity did a study. It's been a little while ago now. But they looked at all of their retirement accounts. And they looked without looking at names. They just looked at how the different accounts did right percentage-wise, the best performing accounts of all, as a group where people who were dead. 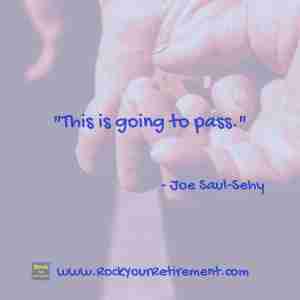 We don't have the fundamental structural problem now that we had back 2007-2008. And if, if this goes away quickly, and Americans continue to do business and shop and save the way they did just a couple of months ago. It will rebound. Now, if it goes long term, we will have companies then go bankrupt. And we will have maybe structurally People work different, people shop different. As an example, people might shop online even more.

If this passes, if we just restart where we were, people go back to the way they were. The economy's not 2007 2008. So this is a whole different beast. It's not comparable.

Disclaimer: If you get an email from the CDC, please don't open it. Most likely it's a computer virus. And you probably don't want to catch that on top of everything else that's going on in your life.

Joe Saul-Sehy is the co-host of the award-winning “Stacking Benjamins” and “Money With Friends” podcasts, which focuses on earning, saving and spending with a plan.He is a former financial advisor (16 years) and represented American Express and Ameriprise in the media. He was the “Money Man” at Detroit television WXYZ-TV, appearing twice weekly.

You can find him at StackingBenjamins.com