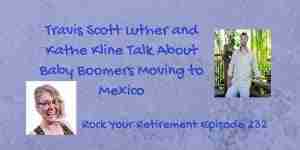 Some baby boomers are moving to and retiring in Mexico.

They are doing this not just to save money, but to have a better retirement lifestyle. I talked with Travis Scott Luther, who wrote a book called The Fun Side of the Wall: Baby Boomer Retirement in Mexico. Travis completed a thesis in 2010 about baby boomers retiring in Mexico. He received a lot of inquiries about the subject, so he decided he would write a book.

From 2007 through 2009, we were going through that global financial crisis. It was during that time Travis has found this small group of ex-pats in Mexico. What he was most curious about is why anyone would want to leave the United States.  After all, the United States was the best country in the world with the best of everything.

His gut told him that perhaps people who might be struggling financially in the US would consider retiring in Mexico to stretch their budget. Maybe they could live more comfortably in Mexico. What he found was quite to the contrary. The person most likely to move to Mexico was actually a high-income earner. Upper middle class, if not upper class. Also highly educated. So what he found was that it wasn’t people who were low income, but rather people who thought more about their money and some who wanted to even retire early.

What about Medical Care when you are Retiring in Mexico?

One of the reasons Les and I did not move out of the country and live abroad is because Les was concerned about medical care. Since beginning this podcast, I have talked with many people who live in the US but who go to other countries, including Mexico, to have certain medical procedures done.

Travis talks with people who are living in the US and wanting information on retiring in Mexico.  He says that medical care is a very common question and concern people have.  What he discovered is that there are a number of routes to enroll in Mexico’s public health system. You can do it through work or if you’re not working, you can enroll through residency. Medical enrollment is actually very easy to acquire versus other countries. He says people who are living in Mexico reported that you might have to wait a bit longer to receive care for a non-emergency standard appointment. However, the standard of care you will receive is comparable to the United States.

Travis found that the baby boomers who moved down there had really dived into the culture and learning the language. In a lot of the communities that he visited, there is no shortage of at least one ex-pat happy to help you navigate the language barriers. There are also many English speaking Mexicans who have lived in these communities for generations. They are fluent in both English and Spanish. According to Travis, it really isn’t hard to get around. No one should be fearful of the language barrier and letting it get in the way of retiring in Mexico. Plus, we all have Google translate now at the tip of our fingers.

When Travis first went down to Mexico in 2007 for his research, he discovered that the folks who moved to Mexico usually had some kind of personal relationship with a friend or family member who already lived there. So people were much more likely to move if they have some social ties that already existed. In his more recent research, he found that people were more likely to move to Mexico on their own without knowing a single person. Travis attributes this to Social Media and the internet and our ability to keep in touch and form relationships online now.

The people that Travis spoke with told him what initially attracted them to the move was the cost savings. However, what made them stay is that they found this authentic community in Mexico. It was this combination of Mexican culture and the Mexican appreciation and respect for elders that they didn’t feel like they had in the United States. Many felt that a culture of consumerism that overtook them or overwhelmed them in the US is something that they really needed a break from.

They also discovered a rich cultural history and this feeling as if they were connected to something that was important to them.

Another thing the ex-pats told Travis was that they didn’t want to have their retirement dictated to them. In the United States, retirement has become commodified. They wanted a sense of community.

Is Retiring in Mexico right for you? 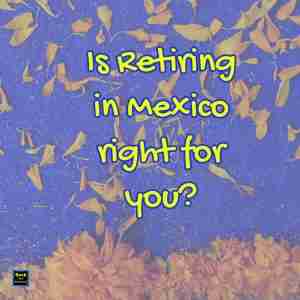 I have always considered moving to Mexico or another Latin country for a limited time. Perhaps move there for 10 years when I am in my 60s so I can soak up the relaxed lifestyle that retirement in Mexico brings.

Moving and retiring in Mexico or any other country is not for everyone. Some people find it difficult to assimilate into the culture.

Do you know anyone who lives in Mexico or another country? Have you considered a move like this? Comment below, I would love to hear your thoughts!

Luther first became interested in Baby Boomers retiring in Mexico during graduate school. His Master Thesis research contributed to the content in this book. He continues to be interested in U.S. expatriates retiring all over the world and continues to monitor those who have chosen Mexico. You can reach him via his website at http://www.travisluther.com

The Fun Side of the Wall: Baby Boomer Retirement in Mexico

This post on retirement and retirement lifestyle first appeared on http://RockYourRetirement.com