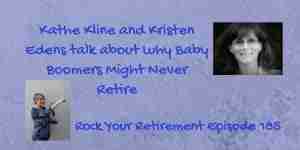 65 is Not the Right Time to RETIRE

The reality nowadays is that Baby Boomers have turned its back on the belief that 65 is the right time to retire. As a matter of fact, most of them want to work well into their 70s or their 80s or even yet, they might never retire. Baby boomers are born between 1946 and 1965. So, most of them are now in their 70s and the youngest would be 54. Boomers will definitely hold a lot of the most senior and best-paying jobs in the workplace. But some of them won't retire, simply because either they haven't saved up yet or are just not ready to hang it up.

5 Generations in the Workforce

With the trend of those people in their 60s, 70s, and even 80s deciding to stay with their jobs and never retire, it resulted in a new occurrence of more generations in the workplace. That is why today, many workplaces are composed of five generations:

That mixture will certainly provide benefits in terms of the wide range of ideas and knowledge from a broad group of people that can actually serve the workplace well.

Bridge Jobs: Why it Might be Ok to Never Retire

The article, Report: 85% of Baby Boomers plan to work into their 70s (and even 80s), talks about something called bridge jobs (e.g., teaching, social work, counseling). Basically, it’s a bridge between full-time work and retirement or a temporary or short-time job right after your full-time career. People who are attracted to these jobs are usually people who aren't fully ready for retirement. In addition to teaching, social work, and counseling where they have more say over what they’re doing, there’s also second careers such as real estate agents, driving, music, or writing.

Those bridge jobs are like we’re looking at what we’ve done in our past, 20 or 30 years in what every field you did and seeing an opportunity that will open up to us. The big question in this matter is, what do I want to be when I grow up? Because we are now allowed to ask ourselves that question once again. You don’t have to be 10, 20 or on the verge of entering college for that matter.

What's Going to Happen to the Younger People?

We have so many people that want to work. So, what's going to happen to younger people? The generations X, Y, and Z? Do you think it’s going to be difficult for them to find a job because of this?

That is one of the fears and myths that exist. There are a lot of job openings, job availabilities and they’re going to be looking for different classes of workers. Those jobs are not going to be limiting one or the other, especially if you’re doing a bridge job. If I get a job as a real estate agent, that’s not going to prevent a young real estate agent from entering that field. If I get a job working for Uber, that’s not going to stop a younger person from working for Uber. And if I’m writing, that’s not gonna stop you from writing. That is because we’re going to have different styles.

Why are People Choosing to Work Longer and is it Going to be a Problem?

It’s in our own minds that we think that if there are many people who chose to never retire, it’s going to be a problem. These are fears that are established from somewhere that just don’t have any reality in life.

There are negative misconceptions around older workers that must be dealt with. One persistent idea is that boomers are standing in the way of younger talent moving up in an organization. In Deloitte’s 2018 global capital trends report, 15% of respondents believe that older employees were “impediment to rising talent.”

People believe that to be the case, especially with retirement age being 65 and people are refusing to retire or wanting to never retire. That’s why where that thought came from is that you’re holding us back and there’s this new wave of young talent coming in, you got to move out. But that’s not true, it's just that myth and the truth though is that there are 14 million job openings available. So, there’s got to be some for baby boomers and some for everybody else.

There are also Other Jobs for the Newly Retired

Older workers might fall into different categories. You might want to work but maybe not full-time. In addition to the bridge worker, we got some other types like the alumni 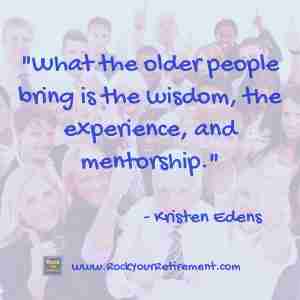 workers (people who left and came back), the tenured workers, gig workers, on-call workers, and the self-employed.

When people retire they expected it to be fun but that’s not what they thought it to be. Also, they tend to become bored and sometimes it’s because it’s not giving them the social interaction. And then they realized, huh, maybe I could go back as a consultant? Or a part-timer. That is why, they tend to go back to their old job and usually, they are welcomed back. Because what the older people bring is the wisdom, the experience, and mentorship.

For example, this show. It didn’t start out as a content plan, because I don’t talk about money or investments, or insurance really, but people wind up finding out that I sell Medicare insurance, and then when they need it, they reach out to me. So that is what Kristen does. I met Kristen Eden on Twitter. She has a lot of great ideas about retirement.

MedicareQuick.com/Checklist
Report: 85% of Baby Boomers plan to work into their 70s (and even 80s) by Sheila McClear