by Rocking Retirement Gal | May 16, 2016 | Adventure and Travel, Podcast, Volunteer and Philanthropy | 0 comments

Bobby Erdrich talks about Acting in Retirement. You can listen to the show at http://rockyourretirement.libsyn.com/acting-in-retirement-episode-019 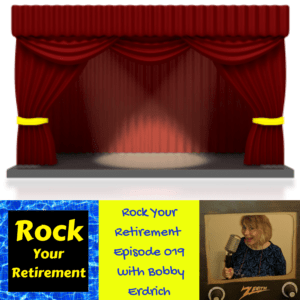 Have you ever thought about acting in retirement?

Bobby Erdrich and I met at The Hearing Experience’s symposium, and I was very impressed with how outgoing and friendly she was.  She was born in New York in 1925 and started acting when she was four years old.  She was “discovered” on a subway. Ever since then she’s been acting, writing, directing and producing, and is acting in retirement in her one woman show.

She loves her Senior Apartment at Woodland Village and said that there is so much to do there that no one could ever be bored if they wanted to get out and meet people.  She loves putting on shows and displaying her acting in retirement skills at the Woodland Village.

When her husband retired as a firefighter, they moved to Oregon and started a farm raising sheep.  She learned to buck hay, birth babies and shovel, well, you know….  They lived on the farm for 20 years before his back made it impossible to work there. They lived in Washington State, where her husband passed away. About 9 years later, she finally settled in the San Diego area.

She doesn’t believe in following her children when they move;She says that they can come visit her where she lives!

One of the most interesting things that I found about Bobbie is that she does not have a computer, nor does she have a smart phone.  If she wants to listen to the interview, she’s going to need to go to a Senior Center (we did the interview at the San Marcos Senior Center) or listen to it on one of her children’s smartphones

She does have a love interest, whom she met after she moved to the community, so it goes to show that one can find love at any age!


She was a mentor at a grade school in Washington State where she told stories about Hinkle and Pinkle’s Rainbow Trip among other stories that she made up for them.  The children loved her for her stories and sense of humor.

Something people should know before they retire:

Don’t take things too seriously.  Greet each new day as something exciting and have lots of laughter.

How to get “unstuck” in your retirement:

It was difficult for Bobby to come up with something because she’s having such a great retirement.  However, I asked her to put her acting skills to work, and she said that if she was stuck in her retirement, she would try to find some people who were not stuck, and do what they do.

Bobby will be appearing in a one-woman play called “Madam, she’s an off key” on May 31st at Woodland Village.  For more information on the play and showing dates, you can contact Woodland Village at 760-975-0000.