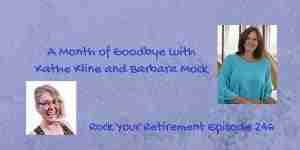 Starting in August of 2020, we started following the life of a pre-retiree Barbara Mock. The goal was to follow her from pre-retirement through the retirement process. So you and I can live vicariously through her experience. We want to know what’s happening as she goes through this process. So we can better prepare ourselves.

Barbara’s retirement date is finally here and she will officially be retired by the end of March 2020. It comes with plenty of mixed emotions for Barbara. This month is a lot of final goodbyes and last things which feels very surreal.

It’s Going to Be a Lot of Flurry and Activity

In retirement, you’re basically facing what is essentially the last transition of your life. During this phase of Barbara’s retirement, she remembers when she got married, there was this big flurry, all the activity, all the things you have to do and get done. And then that day comes, whether you like it or not it comes, and the wedding is over. Then she remembers on their honeymoon, just feeling this sense of where are all the people, where’s all the interaction, Because they went from all these people to just the two of them. So for Barbara, this retirement journey is going to be a lot of flurry of activity and things, and goodbyes this month but then in April, all that’ll kind of go away.

After the Goodbyes, There’s a Connection Day

When you retire, you’re going to have a flurry of people wanting to say goodbye, even if you’re in an office with five people, there’s going to be some goodbyes. And then probably what you’re figuring is going to be more of silence after that.

Luckily, Barbara already has something planned when that time comes. One is, as she has conversations with people, and you kind of know is when they’re saying, oh, I’d really like to stay in touch. And you’re never quite sure if they’re just saying that or if they want to. But these are for the ones that Barbara definitely wants to stay in touch with that she just doesn’t want to lose contact with.

There’s a number of people that I would love to go to lunch with. And so there’s gonna be a lot of time playing golf with her husband, but not as much as he does. Also, she wants to have a day of a connection, a reconnection day. It might be with an aunt, it might be with a cousin, but it might be with some of these people that she had grown to love over 44 years. She’s spent more waking hours with these people than her own children and her husband, they are dear to her, and don’t want to lose that connection. And she knows over time, people move on. But at least for a while. I think that’ll be a landing spot.

Even With What is Happening Today, Start to Plan Again 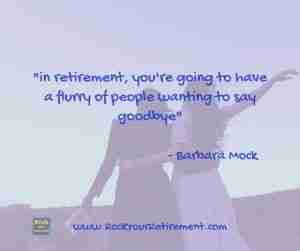 Retirement has looked quite different during the last year. Plans of travel have been replaced by isolation for many families. There are life circumstances, health issues, financial setbacks, there’s always something that stops you possibly from having your, your dreams. And it’s easy, as we’ve seen through this journey, to get discouraged, to get tired to get down.

It just was just such a sense of relief and gratitude to the people that have worked so hard this past year to create or develop a vaccine. It’s nothing short of miraculous. That is why Barbara has been planning to travel again. It may not be now, but she is still hopeful. It’s such a celebration that we can consider doing things again, consider living again because so many of us have put our lives on hold and now we’re starting to feel hopeful again.

Read all of Barbara’s blog posts by visiting https://www.rockyourretirement.com/blog/