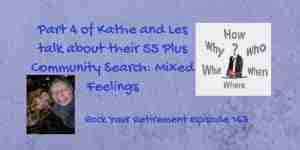 This is the last part of our continuing saga of moving to a 55 and older community. During episode 3 of our podcast, we talked about our newfound community. My husband Les and I finally bought a new house and are moving into it. But as excited as we are about moving to a new house, there are also some things that stress us about moving. That gives us mixed feelings about it.

That is why in this episode, we discussed having those mixed feelings towards moving to a new community. Are we really going to move in or are we having second thoughts about it?


Moving is one of the top stressors that a person can experience in a lifetime. While moving is so stressful, it can be exciting too. As a result of those stresses, we for one are not looking forward to moving to a new place/community. We became attached to San Diego because it's not just a place, it is already part of us.

It is going to be a culture shock for us to move to South Carolina from San Diego. San Diego is a pretty nice place and our friends are here. Yes, our family is near the new community that we are moving in but we don't need to see them very often, 2 weeks in a year is good enough.

It is a lifestyle change for us, moving to a new place that is. We have been having a lot of nervousness and kept thinking about what have done because it's just scary.

Another thing that we are concerned about when moving is our business. I get a lot of referrals from business associates, people that are in the senior community. So I don't know if those referrals are going to slow down now that I'm not in San Diego.

Adapting to a New Environment

A friend of mine was trying to talk me out of moving because he was saying that I should be concerned about the healthcare situation. And if I get sick enough it would be a 2-hour drive to get to a hospital like Charleston. There are hospitals nearby but that's just for normal checkups.

However, I'm looking forward to being able to go to the art center and paint, or go and make pottery but it is scary because we don't know anybody besides our family. We are having second thoughts, but it's kind of like wedding jitters.

The main thing that worries us is the move itself. The whole process is so overwhelming giving us that mixed feeling. Before we weren't moving much stuff as we are moving now. And also now we are moving across the country. We have to pack the boxes better than what we did before. We could get somebody else to do the packing but we'll lose control on what goes where. You don't know where your things will wound up inside those boxes.

Les is an Engineer, and when we move 10 years ago to where we live now. He kept a list of every single item that was in the box and numbered it. And then put that list on a spreadsheet. Those boxes (about 20) are still in our garage that's not completely unpacked yet. 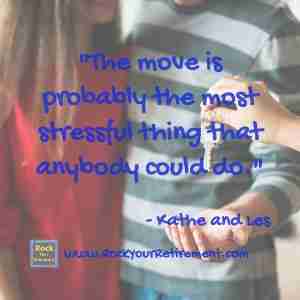 storage. So that becomes an issue too on what will we take or what don't we take. But we know somebody who specializes in downsizing, she was one of the first people on the show. They also help get rid of stuff. We don't know yet how to get rid of our stuff.

To all the listeners, we feel for you, when you retire, when you move. These things are all really exciting but they are also stressful. That is why we have mixed feelings about moving. But we are not changing our minds. Del Webbs has a built-in community and that's what is great about it.

Any change is stressful, changing jobs, retiring, that is why this podcast was started. If you have any advice for us. Head over the show notes and leave a comment. Let us know what we should be doing and how to alleviate our stress.