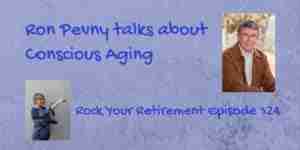 Aging Consciously what does it mean?

Aging consciously is aging with intention, aging with a sense of purpose and aging with a with a real commitment to grow into becoming one of the very best in this third stage or third chapter of life that Ron often calls “elderhood”. Ron thinks you could contrast aging consciously with this kind of drifting into getting old. Believing that with retirement or with retirement age, the best years are behind you. Your years of contribution and making a difference are behind you. Believing that it's kind of a matter of hanging on as best one can and hope for the best.

It's incredibly enlivening. Aging consciously is supportive of the health of body, mind and spirit. If you have a real sense of purpose in aging and is intentional about moving toward that.

Ron believes that baby boomers are going to be the driving force in creating an empowering vision for aging. He thinks baby boomers are playing the lead role in helping our society see that our third chapter can be an incredible time for us as individuals.

Many of us speak about conscious aging or conscious elders but in a lot of different ways and from a lot of different quarters empowered, vision is emerging. Most of us think that people become irrelevant or marginalized after they passed retirement age. We need the wisdom and the gift of wise elders. Ron is doing his best to promote that kind of understanding. In Ron's perfect world, there would be a societal understanding that older adults have a lifetime a wealth of experience and wisdom that they can contribute. There would be an understanding that there's a responsibility that comes with getting older. And that responsibility is to continue to grow and to develop themselves so that they can serve as a model for younger people. This is for the younger people to see that growing old can be something wonderful and not something to dread.

What would a perfect world look like to Ron in regards to aging consciously and supporting our elders?

There would be a societal understanding that older adults have a lifetime a wealth of experience and wisdom that they can contribute. There would be an understanding that there's a responsibility that comes with getting older and that responsibility is to continue to grow. It would be great if younger can see that growing old can be something wonderful. It's not something to dread. It's a stage of life that can be full of fulfillment and meaning. In Ron's ideal world the role of elder is going to be reestablished.

Traditional elders around the world have made a commitment to grow and to serve. He said they make a difference until their dying day. Today, more and more people are claiming that role. In Ron's ideal world, the elder is going to be an honored role and all of us as a society is going to honor that role. When people retire, they will not see it as an opportunity to play around but they're going to see it as a chance to grow and make a difference. It might also be about developing parts of ourselves that maybe we haven't had a chance to develop prior to retirement age.

Just about a year ago AARP and several other aging organizations released the results of a major study. They interviewed thousands of Americans over age 50. They found that the majority of Americans view aging as primarily defined by loss, decline, diminishment, marginalization, and isolation.

If that is the image that we're surrounded with and that we live in, then it's inevitable that many of us to some extent or other are going to have internalized a lot of those kind of beliefs.

I asked Ron what are some actionable items we can take to change this view?

Aging consciously oftentimes that requires stretching beyond our comfort zones. 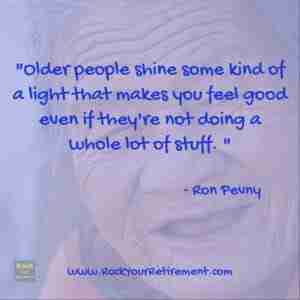 A little background about Ron Pevny:

Ron Pevny, M.A., has for forty years been dedicated to assisting people in negotiating life transitions as they create lives of purpose and passion. He is Founding Director of the Center for Conscious Eldering, based in Durango, Colorado. It is dedicated to supporting the development of conscious elders by offering Choosing Conscious Elderhood retreats and introductory workshops at retreat centers across North America. It is for those in and approaching that period of life, sometimes called “The Third Age,” who hear the call to age consciously.

Ron is the author of Conscious Living, Conscious Aging: embrace and savor your next chapter, published in 2014 by Beyond Words/Atria Books. He is also a Certified Sage-ing® Leader and was the creator and administrator of the former twelve-organization Conscious Aging Alliance. He has served as the host/interviewer for the 2015, 2016 and 2017 Transforming Aging Summits presented by The Shift Network.

The Center for Conscious Eldering