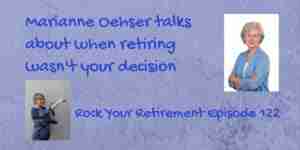 Marianne Oehser is our guest for today's podcast episode. She came on our show to discuss forced retirements and how to cope if it happens to you.

One example of Forced Retirement that Marianne gave us is “Rich” one of her clients. Here's his story:

Rich worked for the government and handled one of the largest and most important departments. All of a sudden, that department was eliminated. Now when this happened, it created a lot of challenges for him. Like many, he is facing a forced retirement. When Marianne and Rich started working together, it became really clear how depressed he was. He had trouble getting up in the morning and by mid-afternoon, he barely had the energy to read the paper. 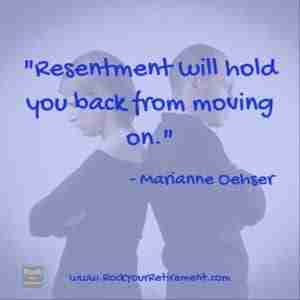 When Marianne talked to him, it seemed like he had lost his sense of purpose in his life. “This happens when you're not ready to retire,” Marianne said.

A forced retirement can bring up a lot of emotions

One of the first few emotions you might feel is anger then resentment. What Rich did after acknowledging what he was feeling is forgive the person that made it happen.  Together he and Marianne worked on letting go of the resentment and pain until he was able to start on focusing on the present.

They worked on building his “happiness”  portfolio. Rich needed to figure what he wanted the 8 important areas in his life to look like and be like. During this process, Rich awakened his desire to write. He took some creative writing classes and thought about doing his memoir. Then he uncovered a short story he wrote in the past.  He published it and now being reviewed as a script for a movie.

Rich now writes screenplays and books. This man no longer tries to figure out how to get out of bed every morning. He no longer has to think about what he wants to do at 3 in the afternoon. Rich now gets out of bed with gust, vigor, and enthusiasm and has lots of things going on. He was able to tap back into his sense of purpose.

How does all of this fit into the balance? How do these 8 work together? Marianne says that we need to have balance so at the end of the day you can say that this is the life that you will be living.

You may reach Marianne Oehser through her website Retire and be Happy or via email: Marianne@RetireAndBeHappy.com

She is a retirement consultant, a Certified Retirement Coach, and founder of Retire & Be Happy. She is a seasoned expert committed to helping people create a happy, fulfilling “post-career” phase of their lives through her workshops, seminars, public speaking, and individual coaching. Marianne also works with singles and couples to successfully build and maintain healthy and rewarding relationships – after all, having a solid relationship is central to creating a happy, fulfilling life.

Marianne has retired twice after spending over 40 years in the corporate world. She is a certified Retirement and Relationship Coach. Marianne also holds a Master of Management from Northwestern University Kellogg School of Management in Chicago. She received her training and certifications from Relationship Coaching Institute and Retirement Options.