A few days after purchasing our motorhome which is allowing us to start this new chapter of our retirement life, we realized that it would be really convenient to have a towing vehicle.  What we didn’t think about before we made this monumental purchasing decision is that my Ford Explorer can’t be flat towed. When we found out that my husband’s F-150 could be towed, but it would need significant modifications involving welding, we took a minute to think further about it.

Some extensive research and talking with friends revealed that one of the best vehicles that can be safely towed behind a motorhome is a Jeep! We went on the search and it was almost too easy to find our Jeep and trade nearly straight across for our Ford. She has some big knobby tires and looks like she is ready for desert adventures!

In one afternoon I went from a quiet, smooth comfortable ride to the loudest, bounciest, and most uncomfortable vehicle I’ve ever driven. But I absolutely love it!  I feel like I’m driving a fun toy.  When I park now, I always look back as I walk away because she looks so awesome.

Driving home in our Jeep Wrangler JK after the trade was completed we were surprised that other Jeep drivers were waving at us.  We looked at each other and wondered, “What is this all about? Why are people waving?”

Unknowingly, the day we bought our “toad” (towing vehicle) we also joined an international club of fellow Jeep owners. A quick Google search revealed the origin story of the Jeep Wave. 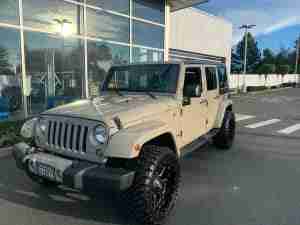 “The roots of the Jeep Wave have a few different origin stories, two of which seem to stick the most. The first theory of the Jeep Wave was that the wave began during WWII as a way for U.S. soldiers to differentiate an ally from an enemy. Jeeps were often driven by soldiers during WWII and the wave was used to greet fellow soldiers when transporting supplies and carrying wounded soldiers.  The second theory is similar to the first, but that it started after the war. Many civilian Jeep owners during this time were most often returning veterans and the wave was a way for citizens to acknowledge the service of veterans and for other veteran Jeep drivers to greet a fellow soldier.”

I had no idea this would be such a blast!  Our Jeep has now been modified so that she can be towed and even has a hitch for our bike racks.  Since we joined the world of Jeeps I’ve joined a few facebook groups for Jeep Beginners and Jeep Life and I continue to learn more about Jeep culture. I’m loving the proud photos, the stories and commentary.

Jeep owners have a unique identity. They name their Jeeps, make all kinds of modifications, help each other if there is a break down, go out of their way to park near other Jeeps, sometimes leave little yellow ducks (called “ducking”) and have clubs that go on adventures together.

What started as a convenient way to have transportation while we are “snow-birding” has turned into a learning experience that is exciting and makes me smile.  I’m learning to watch for other Jeeps in my travels (something I never did before) and am perfecting my Jeep Wave!