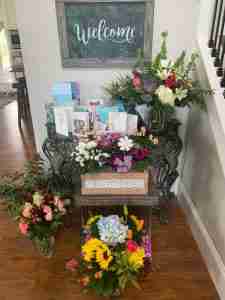 In these last few days before my retirement, beautiful bouquets of flowers are arriving.  Some are from friends.  A few are from family. One arrived from one of my employees and one came from a co-worker in another department.  Each vase is stunning and comes with a card or a note with beautiful words and kind thoughts.

I didn’t expect this at all.  Being at home, I’m not even sure how people were able to find my address. My husband observed that it looks like a memorial service took place in our entryway.  Cards and flowers are stacking up as if I have passed away.

I’m a bit overwhelmed by all of this because I don’t usually receive flowers even once a year, let alone enough for five years, all at the same time!

Early in the week, I received a call from a customer who needed information about a subdivision project down the street from her house.  I called her back with the information and we talked a while. I told her I was retiring at the end of the week and she congratulated me.

I quickly came to realize that she was the widow of the Building Official who hired me to work the front counter decades ago in 1978! It was such a surprise to connect with her.  It was also good to catch up after so many years and to hear how her family was doing. It was fun to reminisce about her husband, one of my first bosses. 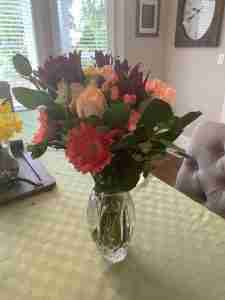 flowers at their offices.  One of the staff people recognized my name on the card and sent me an email. Because I wasn’t in the office, I called my husband who happened to be at the grocery store, and said I had a gift for him to pick up.  He found the office and brought home a huge box with six beautiful plants.  I called her back and expressed my gratitude.  While it clearly wasn’t necessary to send me flowers over one customer service call, it was such a kind and thoughtful gesture.

The following day, I received another huge bouquet, this time from the four now-grown sons of the same Building Official.  They were so proud of their dad and on the card, they wrote, “Best Wishes, You Made It! They listed each of their names as Bill’s kids and ended with “Dad is Smiling Down on You!” My tears flowed.

The days just prior to retirement are a little like a memorial service.  There are cards, flowers, kind words, and both happy and sad tears.  There are many goodbyes, but instead of passing from this life to the eternal next, I’m passing from my working life to my retirement life.  I know I’ll miss my day-to-day work life because it is all I’ve known. But, I have so much to look forward to in this new life, everyday is going to be a blessing.