Cleaning out my desk 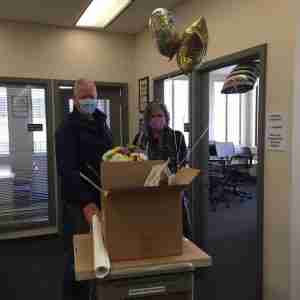 I retired on a Friday afternoon so on the following Monday morning I put away my little Costco table and table cloth.  Then we loaded up my laptop, monitors, and equipment and took it all back to the office. I never really made a permanent office space because I thought the pandemic would only last a few weeks or a month.  I never imagined it would be over a year and that we would still be closed to the public!

It was eery to go back to my office as there were only a few people in the building.  It felt almost like the apocalypse to walk through an empty building.  My administrative manager was going to meet me at 10:30 a.m. so I could turn in my equipment and she said she left four boxes for me to load up the contents of my desk.  I couldn’t imagine that I would have that much stuff to bring home, I usually travel light.

I started going through things and had a shock.  After 44 years, there was a lot more there than I could imagine.  I started throwing out lots of paper and documents that could be shredded but it was kind of like cleaning out an old closet.

Each photo, item, or book brought back a memory and I was quickly overwhelmed.  It was such a challenge to decide what to keep and throw away.  Rather than take a lot of time to process everything in that moment, I ended up bringing home nine boxes!  What I thought would take a few minutes took an hour and a half.

Most directors are fired at some point in their career.  In fact, all of the 20 director’s before me were terminated.  I think that is why most of them just walked out.  I didn’t want to leave a mess for my deputy director, who is being promoted to my position, so I took my time to clean everything out.

My life is changing in a significant way and there is one thing in my office that I’ll really miss.  It seems silly but it is a live edge table that seats 8-10 people.  The wood it was made from is an 80 year old maple that fell in the forest and was rotting.  Loggers in the Oso area near Arlington found the tree and cut it into slabs.  The slabs were sold to a furniture builder who uses reclaimed wood to make furniture.  I was able to choose the slab and the legs from my old chipped formica table was re-used to hold this slab.

In 2013, the Oso area was the site of a massive landslide where 43 people lost their lives.  The ensuing media coverage, litigation, permitting, and public records requests along with the recovery of those who were lost affected me, my employees, and my department. Employees in my department lost friends to this tragedy and there is still grief around this sad event in Snohomish County’s history.

But this table was special to me because something that could have been chopped up for firewood was rescued and became a work of art. All the meetings, the lunchtime chats, the sharing that happened around that table are in my memory.  I used to spend time counting the rings to try and figure out how old the tree was.

One day the Mayor of the Town of Darrington walked in and saw my table and said, “That tree came from Oso, didn’t it?  I said, “Yes it did!”  He said, “I know right where it came from and who salvaged it.”  Then he told me how old it was. Incredible how everything is connected.

My table is a bit of a parable for me.  Out of death can come life. Out of an end, there can be a new beginning.  Something tragic can cause you to appreciate life in a way you never did before. 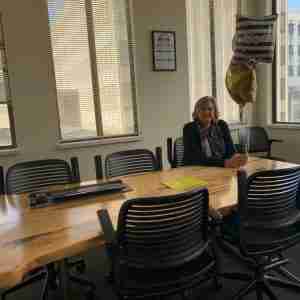 Cleaning out my desk was an emotional moment.  Leaving my beautiful table was too. Packing four decades of stuff I had acquired over a career was bittersweet. But what happened after that was another surprise.  My administrative manager came to me and said she had something in the conference room she needed me to see.

When I walked in, there were five managers and two administrative assistants, my director’s office team.  There were balloons, decorations, cakes and cupcakes, cards, gifts, and a delicious Thai lunch.  They had all secretly come into the office, (for most this was the first time since the pandemic started), to wish me well and tell me goodbye in person.

The end of this chapter is my new beginning.