After our long weekend at Priest Lake, our friends all had to return back to work. Since we had already driven so far and I had more time off, my husband and I continued 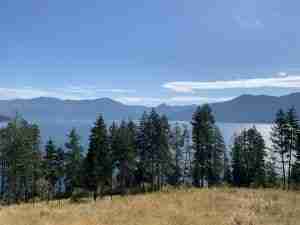 I believe we may have been the oldest people staying in a tent for three nights! We haven’t made decisions about our “envisioned retirement” and so haven’t invested in a recreational vehicle of choice yet. We saw lots of people from all over the country in RVs trailers and campers. Because we were towing a boat we needed a tent and camping supplies. We had packed up all of our old equipment that we’ve had for years stored in the garage. It was a surprise to me that working together to get everything set up, it was kind of romantic! I know dirt camping doesn’t sound romantic, but it was so much easier without little kids. That evening before crawling into our sleeping bags, we took a walk to a swimming area at dusk and visited with families with kids playing in the man-made swimming area. The night sounds, warm breezes, sitting by a campfire and seeing so many stars, it was dreamy.

Our first morning, we put on our hiking boots and rounded the viewpoint and walked about three miles. We ended up in a tiny town called Bayview. In reading the history of Bayview we learned how its tiny population exploded to over 40,000 people when the area was used by the U.S. Navy to train recruits in 1942. Lake Pend Oreille is a deep lake and training for sailors on submarines was done here. Hundreds of thousands of sailors were stationed here and went through basic training on the base that has now become a state park. In the intervening years the growth after the war was slow but now, apparently other retirees have found it too. We saw rows and rows of house boats (or rather homes that are floating) in Scenic Bay right next to the naval station. It is interesting to think about how many people are actually living right on the lake edge. The community is changing because more and more people are retiring to this community because the land and the homes are more affordable.

During our walk, we talked and asked ourselves “who could we bless today”? Here we were, with access to a beautiful lake on a hot day. It was just the two of us with a speed boat that would seat at least 10 people, comfortably. We started looking for someone to share an afternoon with some old folks. It just seemed a shame to not share this gift with some unsuspecting family.

I have to say it was fun to imagine who we could invite. After we made lunch, it ended up being our next-door “camp” neighbors. They were in the spot right next to us! Jared and Raquel, an adorable young couple from Spokane, were camping for an entire week. I imagine it was a little odd for them when a couple of seniors walked up and asked, “Hey, would you like to go for a boat ride this afternoon?” 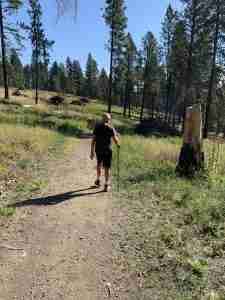 Since it was only about 1 p.m. and already 97 degrees, they didn’t hesitate and said they would love to come along for the ride. We learned that Jared works in technology and also serves with the chaplain corps in the Air Force National Guard. His lovely wife, Raquel is from the Philippines and works at at the Spokane Airport. She said she grew up in an inland village where there wasn’t water so she had never learned to swim!
It was not only fun to bless them by taking them for a boat ride but sharing our respective love stories made the afternoon fly by. It took some doing but as we were taking a dip in the cool refreshing waters of Buttonhole Bay, I was able to gently and gradually convince Raquel to put on a life jacket and sit on the swim step. Then with some more encouragement from all of us she actually went into the water! When she got out of the water, smiling and refreshed and feeling really brave, her husband mouthed over her shoulder , “Thank you so much, she has never done that before!” We were all so proud of her. I think that unexpectedly becoming a part of that special time coaxing someone into the water will be an eternal moment I’ll never forget.

We toured many little bays over the next several hours, shared some interesting conversations about marriage and life and decided to share our dinner time together. We had planned on having barbecued steaks for dinner and they were having what they called Filipino street food. We came to learn it is called “Pancit”. Apparently she used to cook on the streets with her sister before she came to the United States with her husband. We had a feast that night. We were so glad to share our Costco New York steaks in return for her homemade glorious noodle, beef, and vegetable deliciousness. Over the years, I continue to learn that sometimes when you share your blessings with strangers, you can make a friend and are blessed even more!